During my last haircut, the conversation turned to chocolate (a regular topic), and so I told my sad story of scheduling stupidity, chocolate and soy. As part of their “Taste Project,” Recchuiti Confections’ collaborated with Hodo Soy Beanery to explore the pairing of chocolate with the many incarnations of the soybean. I bought a ticket soon after the announcement, marked it in my Outlook calendar and made a mental note.  But somehow, I foolishly convinced myself that it was on Sunday, despite several pieces of information telling me that it was on Saturday, and so I completely missed the event. A few days later, after much of the disappointment had worn off, I was able to see what I had missed in a report by Anita at Dessert First. I recounted some of her report to my stylist and when I mentioned that one of the offerings was chocolate paired with “okara,” my stylist jumped at the word “okara.” “Okara? Really?,” he asked, “We sell a line of hair-care products called okara and everyone in the salon has been wondering what it was.”

After my haircut, I took a look at the shelves and there it was:  the Okara line of shampoos, conditioners and treatments from the French company Rene Furterer. On their website, the company claims that their products are “proven to protect and enhance color-treated hair” thanks in part to “okara extract, a protein from the soybean, [that] repairs and rebuilds damaged hair.”

Okara is the “Honorable Husk”

So what exactly is okara?  Okara is a Japanese word for the by-product of the soymilk and tofu making process; it is the fibrous material that remains after cooked soybeans are pressed through screens to separate the liquid from the solids (in Korean is biji).  Since it is mostly considered a by-product, it is rarely seen or spoken of — I have been eating tofu and drinking soymilk for decades, yet I rarely see it mentioned, and the first time I saw okara “in the flesh” was on a tour of Hodo Soy Beanery in Oakland just a few months ago (I wrote a summary of my visit for the Ethicurean).

Although okara is generally considered a by-product, it’s interesting to note that the Japanese word begins with the letter “o”, a term of honor in Japanese. Thus, with kara meaning shell, hull or husk, o-kara means “honorable kara.”  The honorific “o” indicates its importance to the Japanese during their long history with soybeans (note also that the Japanese word for tofu is often prefixed with “o.”). One prominent example of the importance of okara is in Donald Ritchie’s “A Taste of Japan”, where he mentions Arai Hakuseki, a famous scholar during the Edo period, who claimed to have survived almost entirely on okara donated by a tofu maker while a student. When later rich and famous, he gave large gifts to the tofu maker who helped him get through his education.  For a long time (and perhaps even today), apprentices in tofu-making shops were given the daily batch of okara as part of their compensation and allowed to sell it wherever they could. 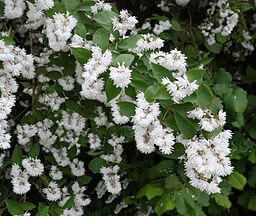 Okara goes by another name in Japan, according to the the SoyInfo Center’s “Book of Tofu”:  unohana, a name that comes from a poem by Basho that referred to the tiny white blossoms of the Deutzia scabra flower.

Okara is edible and nutritious — it has 3.5% protein by weight (about the same as milk on a weight basis) and is high in fiber — but also bland. Because of the blandness and other textural issues, Hodo Soybeanery (and most other tofu makers) sell their okara to livestock producers as animal feed (however, it’s worth noting that Hodo has experimented with prepared dishes like a hummus analogue made with okara instead of chickpeas, and use it in their vegetable patties. They also will bring it to their Farmers Market stand with prior arrangement).

The Book of Tofu has a chart showing the protein content of each stream of the process which I have adapted below.  Each box lists an element in the tofu-making process with the percentage of original soy protein listed below.  Tofu contains about 73% of the original protein of the raw soybeans, with 17% ending up in the okara and almost 10% in the whey and storage water. 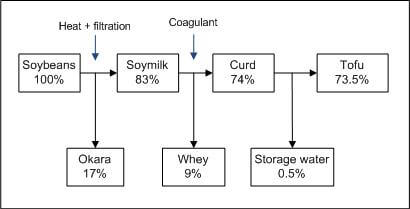 Okara is also useful as a green cleaning agent: “Tofu Cookery” by Fusako Holthaus notes that okara can be used to polish floors and woodwork. The book recommends wrapping okara in a cloth and applying vigorously to a surface, but is short on details (should the okara be dry or moist? What kind of cloth is recommended?).

I asked the “Tokyo correspondent” for this blog about his experience with okara in today’s Japan and received the following report:

Okara has always been around (my wife said that growing up in Japan she would sometimes have it), but over the past few year’s it’s kind of become popular again because it’s relatively inexpensive and healthy. A few years ago, when I first saw a cooking show with them making Tofu/Okara hamburgers, I tried to find it in the supermarket but couldn’t. Some people told me that if you ask at a Tofu store they often give it to you for free, or relatively cheap. But lately I’ve been seeing bags of it in the supermarket – sometimes pre-packaged as an actual product. The Tofu truck that comes around every day at about 4:00 p.m. through the neighborhood also sells bags of it (or fresh soybeans that you can boil and marinate in soy sauce and mirin and vinegar or whatever) along with Tofu.