The Temper-Spoon, a Device for Temperature Measurement While Stirring

Buying a Thermapen to handle temperature measurement in the kitchen was a bit of an extravagance, but since I’ve spent much of my professional career concerned with accurate temperature measurement (e.g., combustion products above a glowing ceramic tile, diesel engine exhaust), I’m very picky about temperature measurement.  Particularly, I like to know where the sensor is reading and like to get the answer quickly. The lower-priced devices that I have tried, such as a digital sensor from Taylor, fail on both counts.  The Thermapen, however, is fast and has its temperature sensing device at the tip of the probe, so it has passed most of my tests (though not always with A’s).

But when it comes to liquids — like heating or cooling milk for home-made yogurt — I’ve been wanting an add-on device so that I can measure liquid temperature while stirring.  My hypothetical solution:  a clip-on spoon accessory, the “Temper-Spoon,” which I have sketched below in a multi-view drawing (front, top and side views).  It is basically a spoon that has been modified to have a hole in its scoop and can attach to the thermometer.  The hole in the scoop allows liquids to flow across the temperature probe while stirring a liquid; its dimension should be large enough to let a good amount of fluid pass across the probe, while still having enough material remaining to stir the liquid. 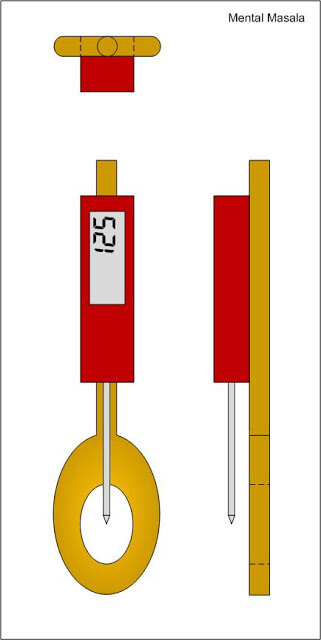 Soon after I bought my Thermapen, I tried to make a Temper-spoon by drilling a hole in an old wooden spoon and using block of wood to attach the two. Since I was dealing with two cylinders, I drilled two holes into the block of wood: one was the diameter of the spoon and the other was the diameter of the Thermapen probe. It was a minor success for a time, until the attachment block split apart.  The choice of a wooden spoon was sub-optimal, as I worried about the somewhat rough wood harboring bacteria (a stainless steel or silicone model would be preferable). ThermoWorks, the manufacturer of the Thermapen and other temperature measurement devices makes a stationary probe holder, but no spoon accessory. If you are enthusiastic about temperature measurement in the kitchen, have you tried building a spoon-thermometer hybrid?  Or seen any other good ideas?

Update:  I’m definitely not the only one to think of this:  while browsing the sale rack at Sur La Table one day, I ran across something similar to my Temper-Spoon idea in the form of the Mastrad Thermometer Spoon. It’s a clever device that consists of a silicone spoon and removable electronic temperature probe with the readout at the top of the spoon.  The tip of the probe is in the bowl of the spoon giving you a temperature measurement as you stir. Since the probe is removable you could use it elsewhere as a normal probe. It was heavily marked down, so I bought one.

I used it to make plum jam last weekend and the design was not quite right for me. As I stirred, the orientation of the readout was not visible — a rotation of about 45 degrees would have been great, but the spoon only allows for 180 degree readout rotation.  I’d also like to see a hole in the spoon to allow better fluid flow across the probe.