The Age of Shrimp 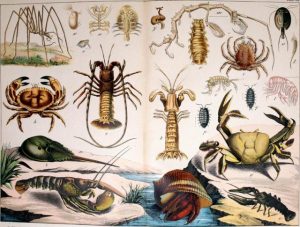 During an interview on To the Best of Our Knowledge, Ellen Ruppel Shell, the author of “Cheap: The High Cost of Discount Culture,” dropped an amazing fact: we eat more shrimp today in the U.S. than tuna fish. It was one of those “wow” statistics that I had to check out for myself.

Fortunately, the U.S. Census Bureau released a new Statistical Abstract (via Marion Nestle’s must-read Food Politics blog) a few weeks ago and I quickly found what I was looking for in Table 893, “Supply of Selected Fishery Items” (PDF, Excel) on the Fisheries, Aquaculture page.

The tuna and shrimp data are shown in the first figure below: while per capita canned tuna availability has remained relatively flat over the last few decades, shrimp availability has risen sharply, especially since the mid-1990s.  (Note: “availability” is a USDA term that is an estimate of “food supplies moving from production through marketing channels for domestic consumption.” This USDA page has a lot about the concept of availability)

So what happened? Globalization and aquaculture teamed up to make farmed shrimp far more plentiful, lowered their production cost significantly, and managed to bring the product to stores and restaurants in great quantity.

The last few decades have seen great advances in the art and science of moving large amounts of perishable goods around the world, thanks in part to refrigerated cargo containers, air freight, and improvements in logistics and distribution.  At the same time, aquaculture experts have figured out how to grow shrimp in coastal and inland farms, while the rest of the supply chain — processing, transportation, distribution, marketing — has fallen into place.

Almost all of the increase in availability is because of imports, as the next figure indicates.  The blue line at the top shows the total imports, while the dotted lines (orange, green, purple) show the imports by sector. The red line running from the year 2000 to 2009 is the domestic catch, and it’s been steady during that time.

The next figure shows import totals for the countries that make up roughly the top two-thirds of the imports.  Thailand really stands out with rapid growth from 50 million pounds in 1990 to over 400 million in 2009.

Shrimp is a messy subject because there are several varieties and several ways of capturing or farming them.   The Shrimp page from Monterey Bay Aquarium’s Seafood Watch has 13 entries for shrimp and prawns, with ratings of “best choice,” “good alternative” and “avoid” scattered across the list.  If you click on an individual entry, your browser will reveal Seafood Watch’s explanation for its rating of that entry.

Most farmed shrimp are big trouble, as they are raised in “Aqua-CAFOs” that closely resemble cattle or hog “concentrated animal feeding operations” with all kinds of chemicals and antibiotics required to keep the creatures alive. In addition, the aquaculture areas are created by destroying mangrove forests, which are biologically rich coastal areas that providing habitat for a wide variety of creatures, including juvenile fish — hence, mangroves are often called “nurseries of the seas.”

However, some farms are improving their practices.  On the Seafood Watch page about shrimp, imported farmed shrimp raised in “fully recirculating systems” are given the “Good Alternative” rating because these farms — which comprise only about 25% of the total shrimp farms in Thailand — are fully-enclosed ponds that don’t release pollutants to open water. Some retailers like Walmart are using third-party certification agencies like Aquaculture Certification Council to ensure that their suppliers are using good practices. However, there are concerns that these certifiers aren’t independent enough.  (My review of “Bottomfeeder” by Taras Grescoe at the Ethicurean has a bit more about how shrimp farming can be disaster for ecosystems and the people who live near shrimp farms.)

Some are making advances with smaller-scale recirculating aquaculture systems, like the operator of the Shrimp Farm Market in mid-Michigan.  Michigan, with it’s cold winters, isn’t exactly the best habitat for shrimp, but this shrimp farmer is getting around the bad weather by creating his own through use of an enclosed system (Edible WOW magazine had a short story about his farm, available as a PDF).

Wild shrimp aren’t without issues, the biggest being “bycatch”. The Seafood Watch page on wild-caught imported shrimp notes that “Shrimp trawling has the highest bycatch of any commercial fishery – for every pound of shrimp hauled in, three to 15 pounds of unwanted animals die in the process” (click on the link for wild-caught imported shrimp on the Seafood Watch page for details).  More recently, the explosion of the Deepwater Horizon oil rig brought worries about chemical contamination of shrimp caught in the Gulf of Mexico.

First figure: Availability = domestic supply minus exports plus imports. The shrimp weight is for heads-off creatures, the tuna weight is canned weight. Per capita results were obtained using U.S. population figures from an Excel spreadsheet in the documentation on food availability at the USDA, which covers U.S. residents plus Armed Forces overseas.

Second and third figures: import data by country and form of import are from USDA’s Economic Research Service. U.S. landings are from NOAA’s Fisheries Statistics Division,(PDF).

The figures were created using the Calc application in the free software suite Open Office. It’s a pretty good replacement for Excel, but I’m still learning to deal with its quirks.

Image Credit
Image from page 484 of “Natural history of the animal kingdom for the use of young people: in three parts” (1889) from Internet Book Archive’s Flickr collection, no known copyright restrictions.