Sometimes I see something so mysterious and compelling — like “Ice cream, bisque of black bread, a la Delmonico” — that I need to track down its story. Most of the time, I lose interest or have no hope of finding the answer, but sometimes lightning strikes and I find the answer.

One of these lightning strikes happened recently with the bisque of black bread. This mysterious item was on the menu of the infamous whale meat luncheon at the American Museum of Natural History in 1918.  When I first saw the menu item, I wondered “What the heck is a bisque of black bread? That sounds bizarre.”  But as I think about it more, I recall bread and chocolate, bread pudding, the use of rye flour in sweet pastries in Kim Boyce’s Good to the Grain, so perhaps it isn’t such a bizarre idea.

My initial internet searches came up empty. Soon, though, my luck changed, thanks to some old “old media.” I was sorting through my collection of old Saveur magazines (preparing to give most of them away) and one of the covers announced “Dinners from Old New York.” As luck would have it, the article — “Grand Cuisine” by Richard Horwich  — was all about the long-gone New York restaurant called Delmonico’s.  Delmonico’s, as in the a la Delmonico part of the bisque of black bread menu item.

In his article, Horwich mentions a famous cookbook written around the end of the 19th century by a long-time Delmonico’s chef named Charles Ranhofer. This book — The Epicurean — has been digitized by Google Books and the full text is available at Hathi Trust. After a lot of clicking and waiting for pages to load, I found the recipe on page 987! It is called Pumpernickel Rye Bread Ice Cream and mysteriously grouped with cinnamon and ginger ice cream.  Here’s is a scan of the page (the plain text of the recipe is in the reference section):

I am guessing that they renamed the dish on the whale meat menu to align with the food conservation message, i.e., to contrast it with the white bread that was discouraged during the war.

The ice cream appears to be straightforward: rye bread in an unflavored ice cream base. Although it sounds a little odd to me, it must have been a flavor favored by the diners of the day because Delmonico’s had a reputation as a palace of fine dining. I was curious to see if perhaps this flavor was popular in Delmonico’s era, and so I searched the New York Public Library’s menu collection for a little while.A ll I found was a rye bread ice cream” on a 1900 menu for Edward F. Lang’s Ladies’ and Gent’s Lunch Room and Restaurant (139 Eighth Street bet. Broadway and 4th Ave., New York).

Have you ever seen a rye bread-flavored ice cream in a cookbook or ice cream shop? I have never seen such a flavor; the closest I have seen is a reference to burnt toast flavored ice cream from the brilliant team behind San Francisco’s Bar Tartine in a Saveur 100 issue.  If I ever see it offered, I will certainly try it, even though there’s a good chance I won’t like it — caraway seeds are one of my few absolute disliked flavors. But with a caraway-free dark bread like the Finnish Rye that I wrote about a while ago, perhaps it could work.

Update, 6/11/2016: At the 2016 Bay Area Book Festival in Berkeley in early June, one of the booths was all about the Ice Cream Travel Guide, with the author, Jennifer Ng, on hand to talk and sign books. I asked her if she has ever seen rye bread ice cream and she said no. The closest flavor she recalled was a brown bread ice cream in Ireland. Unfortunately, if she told me how it tasted, I’ve forgotten what she said.

Update, 5/16/2017:  Via Grub Street, Danny Meyer’s new Daily Provisions bakery and cafe will be teaming up with Portland’s Salt & Straw to serve a rye bread ice cream this summer — “The rye flavor comes from bread that’s been crumbed and steeped.”

More on Delmonico’s and Ranhofer
Delmonico’s restaurant occupied at several different buildings during its long run in Manhattan, moving to find better spaces or to follow the money. The restaurant’s peak was the mid- to late-19th century, when it was a favorite of the elite: mayors, titans of industry, theatrical stars, writers and other notables like Samuel Morse and Charles Dickens (here is the menu for his dinner). Finally located at Fifth Avenue and 44th Street, it closed in 1923, a victim of changing tastes and prohibition. 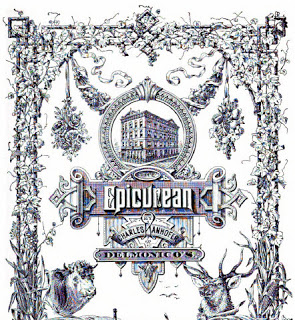 Ranhofer’s book is monumental: over 1,000 pages, more than 3,000 recipes, and at least 500 menus that cover nearly every combination of meals, number of people and time of year (for example, a supper in May, a luncheon in January, an August garden picnic for 100 people, a sideboard for 800 persons at a wedding). Ranhofer was quite attentive to the seasons, offering tables showing when vegetables, fruits, meat and fish were in season, and when they were hothouse-grown or imported from Europe.

Not everyone was a fan of Ranhofer’s work. In A History of Old New York Life and the House of the Delmonicos, by Leopold Rimmer (1898), Mr. Rimmer wrote:

The only mistake that ever was made against the interest of the Delmonicos’ business was Mr. Charles Rauhafer’s cook book, which gave away all secrets of the house, and every Tom, Dick and Harry, who calls himself a chief cook, and had learned his trade in Delmonico’s kitchen, can cook and make up the finest dinners on record, with that book, which tells him everything he don’t know. There is hardly one hotel in New York to-day whose chef did not learn his cooking at Delmonico’s, every one of them. The book gave all the secrets to the world —the market, what is in season, where to get it, and what is the correct thing to eat every day, and all the year around.

The recipe in plain text:

Pumpernickel Rye Bread. — Grate half a pound of rye bread and pass it through a coarse sieve or colander; pour into a vessel and throw over a pint of thirty-degree syrup. Break twelve egg-yolks in a tin basin. add eight ounces of sugar, mix well with a pint of boiling milk; cook this on a slow fire without boiling, remove and when cold strain through a sieve, freeze, adding the rye bread when nearly frozen and two quarts of whipped cream (No. 50)

Image Credits
Bread + ice cream image made by the author using a bread image from the Internet Book Archive, page 195 of The pride of the household; the bakers’ complete management (1900), and a detail of an ice cream advertisement from The National Archives UK, The Sydney Mail, March 23, 1932, CO 1069-607-41 (part of a great photo album about the opening of the Sydney Harbor Bridge).  The Epicurean illustration is from the full text version at Hathi Trust.

The ice cream image is a detail of an advertisement for Peters Ice Cream. If you look at the full page, you’ll see text to the right that reads

The Health Food of a Nation
Manufactured almost entirely from the Primary Products of AUSTRALIA
…
PETERS AMERICAN DELICACY CO., LTD.

Ice cream as the nation’s health food, and an ad boasting about Australian content has a company name of American Delicacy…