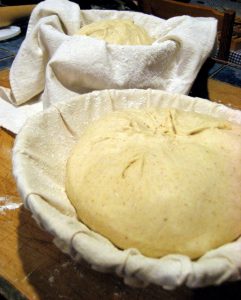 “Let rise at room temperature” is a common instruction in bread recipes, with “room temperature” being about 70 F (21.1 C)*. For various reasons, however, this temperature can be hard to find in my apartment in Berkeley, California, and so my bread doughs sometimes rise far too slowly.

One day, I realized that my Arduino Uno microcontroller could help solve this problem.  I had earlier configured it to measure milk temperature during yogurt making, and realized that would be a short leap to use it to control the air temperature inside a container, thereby creating a stable and warm location for dough fermentation and proofing (a “proofing box”).  My idea was simple: an incandescent light bulb in a clip-on lamp as the heat source, a temperature sensor, a switch that turns the light bulb on and off, and the Arduino to control the switch. Basically, as one person who heard my plan put it, “It’s an Easy-Bake Oven!”

But how would I switch the light bulb on and off using the low voltage, low current digital outputs on the Arduino? A relay could be wired in and the lamp could be hacked, but that would be bothersome and potentially dangerous.  Then I learned about the Powerswitch Tail II. This easy-to-use device allows your Arduino or other controller to switch on and off an A/C powered device, like a lamp, coffee maker, hot plate, and so on. By connecting a digital output line and ground from the Arduino to the + and – inputs of the Powerswitch Tail, the connected device can be switched on and off. No cutting, soldering or taping required, just connect and go.

After the jump, I’ll detail the parts that make up my air temperature controller and show some results from two batches of bread.

Adafruit was my source of all of the components except for the lamp and thermocouple:

The next drawing shows the basic layout, with the boundary of the temperature-controlled zone indicated and most of the major hardware shown. 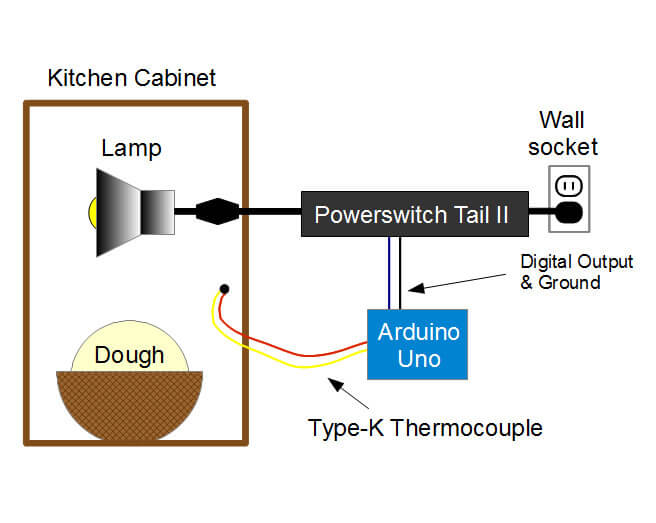 It’s not a very photogenic set-up, but for completeness, here are photos of the main components, the first showing the PowerSwitch Tail II and the Arduino with LCD, and the second showing the lamp and thermocouple installed in the cabinet: 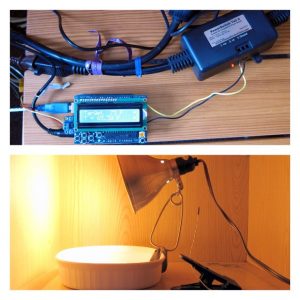 My first full-scale test was a two-day bread from Nancy Silverton’s Breads from La Brea Bakery (the first recipe in the book). On the first day, I mixed and kneaded the dough, then let it ferment for a few hours in the temperature-controlled cabinet at 70 F. After shaping the loaf, I let it spend the night in the refrigerator to develop more flavor. Next, I returned the loaf to the temperature-controlled cabinet so it could warm up to the recommended internal temperature of 62 F before going into the oven. The warm up took a long time, so I got a chance to test the system’s response to changes in set point as I increased it a few times.

In the figure below, the blue line shows the air temperature and the orange diamonds show manual measurements of the dough’s internal temperature during the seemingly endless warm-up period (it takes a long time for a piece of dough to go from 40 to 62 F). The changes in set point are indicated by the five stair steps in the chart. I was quite pleased with the performance, as it reliably tracked the set point, even though my control algorithm was ultra-simple (perhaps someday – just for fun – I’ll dig out my control systems textbooks and implement a PID control strategy for optimal set point tracking). 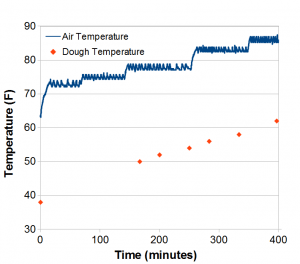 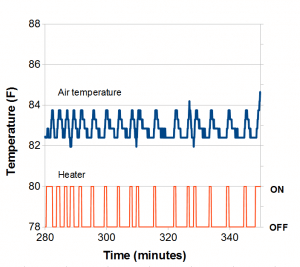 A Less Eventful Test
On a warmer day, the controller doesn’t do much, as the figure below shows. After a few minutes of heating to reach the temperature target, the enclosure’s heat losses were small enough so that the temperature stayed above the set point until the fermentation and proofing was complete (this time, FWIW, the recipe was Cook’s Illustrated’s partly whole-wheat bread).

Overall, I’m happy with the device, and as the coolness of summer in the foggy East Bay and the bread-friendly tomato season approach, I expect to be using this system quite often. 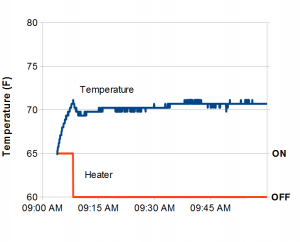 Disclaimer: Attempt the projects described in this blog at your own risk and observe common sense safety precautions.

Note
* I looked in several books to find definitions of room temperature. In Peter Reinhart’s The Bread Baker’s Apprentice and Whole Grain Breads:, room temperature is about 70 F (see p. 88 and 284, respectively). In The Science of Good Cooking from the Cook’s Illustrated team, “room temperature is generally considered to be about 70 degrees” (p. 6).

This work is licensed under a Creative Commons Attribution-NonCommercial-ShareAlike 2.5 Generic License.
Secured By miniOrange