When Fenugreek Leads to a False Diagnosis 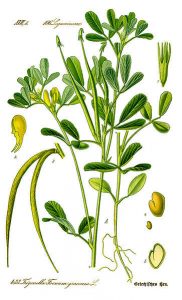 It’s a busy night in the maternity ward, babies being delivered left and right. While changing the diaper of a newborn, one of the nurses smells maple syrup, an unusual occurrence. And after a few seconds of memory searching, mental alarm bells go off:  “It must be Maple Syrup Urine Disease!  This is a big deal!”*

Indeed, despite its quirky name, Maple Syrup Urine Disease (MSUD) is a big deal: it’s an inherited central nervous system disorder that prevents proper metabolism of certain amino acids, and if left untreated can cause neurological damage and mental retardation. The prevalence rate is around 1 in 200,000 in the general public, but much more frequent in certain relatively closed populations (notably the Mennonites of Pennsylvania). (A detailed overview of MSUD can be found at Medscape.)

Back in the hospital, tests are ordered to confirm the nurse’s olfactory diagnosis. And they come back negative. So the doctors and nurses start questioning the mother, and ideally will ask: “Have you consumed any fenugreek seeds or leaves recently?” If the answer is yes – perhaps the mother ate a paste of fenugreek seeds that is purported to ease labor, or ate the seeds some time after delivery to improve breast milk production – then that’s the likely cause of the maple aroma. Fenugreek (Trigonella foenum-graecum L.), it turns out, contains a chemical called sotolon (or sotolone or 3-hydroxy-4,5-dimethyl-2[5H]-furanone) that has a strong maple-syrup-like aroma, and those who eat it will exude the aroma of fenugreek and/or maple syrup for some time. Sotolon is so similar, in fact, that it is used as an artificial maple flavoring (see my previous post on fenugreek for more on this). If the mother ate the fenugreek before delivery, the baby most likely absorbed the maple-syrup-chemical in utero, which led to the urine with a maple syrup aroma.

Several articles have been written for medical journals about the MSUD-fengreek connection.

One article (reference 1) discusses some cases of what they call “pseudo-MSUD” and notes that there is a tell-tale difference between true MSUD and pseudo-MSUD from fenugreek:  when the mother ate fenugreek soon before delivery, the odor of the baby’s skin and his or her urine is strongest a few hours after birth and diminishes over a few days. When it is really MSUD, though, the odor doesn’t appear until one or two days after birth because it takes a certain amount of protein ingestion to trigger the maple emissions. In much of the world, the authors write, hospital workers don’t know the aroma of maple syrup, and therefore are unable to identify MSUD, and these pseudo-MSUD events can train staff how to recognize the aroma of true MSUD. But in many non-maple-syrup-familiar places, the aroma of fenugreek might be well known, so perhaps a local name could be adopted along with clear protocols for testing and differentiating between real and pseudo-MSUD.

A letter to the New England Journal of Medicine (reference 2) recounts the case of 9-day old infant who was brought to the hospital because of diarrhea and vomiting. The staff smelled maple syrup, and their initial thought was MSUD. Test results were negative, and it turns out that his mother had given the infant a tea made from fenugreek seeds as a “folk remedy” to ease his digestive troubles.

A group of researchers from Europe and North Africa published two papers that detail their attempts to develop analytical methods for detection of fenugreek by-products in human sweat and urine (references 3 and 4). According to the authors, no one has determined which compounds are emitted in human sweat after eating fenugreek, and such knowledge would help in “development of methods able to eliminate or reduce the presence of this strong odour” (perhaps we’ll see an anti-fenugreek odor pill similar in concept to Beano?).  In both studies, they had subjects wear specially prepared gauze pads under their arms for many hours to collect sweat, and used analytical techniques to identify the chemicals absorbed by the pads and also to separate the sweat into a number of individual chemicals that could be smelled by trained human assessors.  The assessors provided commentary on the compounds, e.g. neryl acetate, a chemical found in the sweat only after fenugreek ingestion was described as “fruity, blackcurrant, floral,” and β-Caryophyllene was described as “musty, spicy, woody, pungent.” The researchers end up detecting eight compounds that were in the subjects’ sweat after eating fenugreek. Interestingly, none of these were sotolon, and the compound that the sensory panel described as smelling of “fenugreek” was unidentified because its concentration was below the analysis machine’s limit of detection. The authors propose that the fenugreek-y chemical is a metabolite of sotolon.

Notes
* It wasn’t Northrax, a fictional chemical agent which was mentioned several times in Season 2, Episode 6 of 30 Rock (via Gothamist).