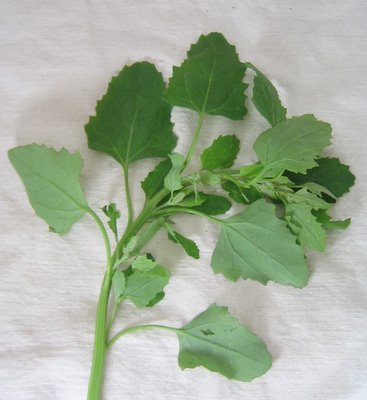 A few weeks ago at the Farmers’ Market I spotted yet another unusual green: lamb’s quarters (Chenopodium album, also known as goosefoot, pigweed, wild spinach, fat hen) at the Full Belly Farm table.

Chenopodium album grows all over the world, including in European trash heaps. The Oxford Companion to Food explains: “This plant thrives on muck heaps, and remains of it have been found in neolithic middens; many of the local common names used in England reflect this, e.g. dungweed, muckweed, and dirty dick.” With the recent concern over E. coli 0157:H7, I hope that farmers aren’t harvesting lamb’s quarters that grow in or around the dung heaps of corn-fed cattle.

In Mexico, these greens are called quelites (as are many other edible greens). According to Rick Bayless’s Mexican Kitchen, the word derives from the Aztec word quelitl, which was used for any culinary green or herb. Since my first introduction to the use of lamb’s quarters was by Bayless in Mexican cuisine, I cooked my bunch of lamb’s quarters in two Mexican dishes. The first was in soft tacos, with the greens lightly steamed and topped with hot sauce and cheese. The second was in a tortilla casserole, combined with cheese, corn, squash and crema (a relative of sour cream). The greens were excellent in both dishes, with a pleasing tenderness, a mild spinach-like flavor and none of the lingering astringency that I find in spinach.

Of the seven unusual greens profiled thus far, these are probably my favorite, and I’ll be sure to buy them whenever they appear in the market.

Update (01/09/07)
Gourmet’s Diary of a Foodie television program on PBS this weekend was Episode 9, Living Off the Land. In the kitchen demonstration segment, the Gourmet staff member made what he called “Prospect Park Pesto,” a pesto made from lamb’s quarters and wild garlic foraged from Prospect Park, Brooklyn. The website doesn’t list a recipe for the pesto; it appeared to be a standard food processor pesto (pulverize the garlic by hand; puree the greens in the processor; add cheese, pine nuts and the garlic; pulse a few times; add olive oil while the processor is running.)

I have seen only three episodes of “Diary” and am quite impressed. The show travels the world in search of interesting food stories, like the use of indigenous ingredients in Brazil, making knives the old way in Japan, or farming in Maine. The segment lead-ins with the narrator typing at the keyboard are a bit annoying, but that’s a minor flaw.