Finally heeding the call of Lahey’s “no knead bread” 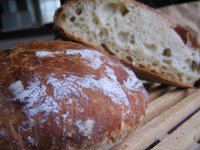 Like so many other food bloggers, I heeded the call of Jim Lahey’s No Knead Bread that was written about by Mark Bittman in the New York Times. I enjoy making breads that require lots of kneading and post-knead folding (e.g., the ciabatta from Artisan Breads across America), but a bread that I could make without pulling out the KitchenAid mixer or planning my day around bread making had to be tried.

And so I did. Late on a Wednesday night I mixed the dough (using the weight proportions in Bittman’s second article). It then sat on my counter at about 55 to 65 F for twenty hours until the next evening. After the initial shaping, I cut the dough in two for the final proof.

One reason that I delayed baking this bread for so many weeks was the lack of a four to six quart cast iron pot to hold the dough. After asking everyone I knew if they had such a pot and receiving “no” all around, I tried baking with what was in my cupboard: a 2 quart (1.8 L) Le Creuset saucepan with a matching lid (one of my great thrift shop finds: I paid only $2.50) and a 2 quart (1.8 L) ceramic casserole dish with an aluminum foil cover (thanks to Gerda of tschoerda for the idea to use the casserole and foil).

I have been using artisan bread baking techniques for almost a decade and the crust on the no knead bread is easily the best I have ever baked. My previous loaves might have nice color but a weak, thin crust; or they might have the perfect crunch but some major flaw. Or I might break an oven light or two as I sprayed water into the oven to make some steam. Or nearly burn myself pouring water into a pan on the oven floor. Now I know that the cover is the key.

As for the bread’s taste and texture, it was good but not great, and so I need to do some experimenting. Perhaps a bit of rye flour, some wheat germ, or another flavoring.