Penang Island–a small (300 sq. km), highly urbanized island off the coast of northern Malaysia–was HOT in the food blogosphere world in the autumn, with visits by Real Thai, Rambling Spoon, Chubby Hubby, and Rasa Malaysia. I visited for a few days in October, and have finally gotten around to posting some remarks and photos. 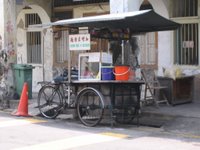 Dining Timing
Recently the New York Times’ Matt Gross reported on his trip to Penang in a feature travel article. He spent a few days in Penang and had an all too common tourist experience in Malaysia and Singapore: showing up to a renowned restaurant only to be disappointed. He wrote

But don’t wait to try it [assam laksa, a noodle soup of fish, tamarind, herbs, and various other elements] on a Wednesday, at least not in the nearby town of Balik Pulau, reputed to have some of the best laksas around. As I discovered the hard way, laksa vendors take Wednesdays off to clean their stalls. So I made do with Hokkien prawn mee (long egg noodles in a rust-colored shrimp broth) and rose apples and jasmine limes from a tropical fruit farm in the mountains.

It wasn’t until the next day at lunch, at Georgetown’s Joo Hooi Cafe, that I finally got to satiate my laksa urge. The bowl that arrived was a master class in contrasting textures and flavors, with each ingredient striking an almost perfect note: the rich and oily mackerel, the sharp mint and spicy sambal, the sour tamarind and sweet pineapples. And the thick, round white noodles were the chewy embodiment of “q,” the Chinese analog of al dente.

I would have eaten two more bowls, if I hadn’t also ordered char kway teow, a platter of rice noodles stir-fried with Chinese sausage and blood cockles, that was the very essence of wok hei.

Alas, that was to be my final assam laksa, either because I arrived too early, too late or on the wrong day everyplace else.

In my case, heavy rain was the enemy, and prevented me from visiting the culinary hot spots recommended by Rasa Malaysia and others. Nonetheless, I ate plenty of delicious casual food like roti canai, roti tissu, mee, and masala dosa, primarily at the two 24 hour Nasi Kandar restaurants on Penang Road near my hotel. 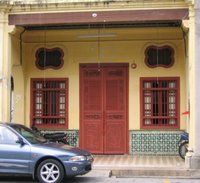 Sightseeing
The atmosphere in Penang is far more relaxed than Kuala Lumpur, and it is eminently more walkable, with most of the city center retaining a large fraction of colonial-era buildings, many with lovely details like the doors, windows and tiles pictured to the left.

On your first day on the island, be sure to stop by the Penang Heritage Trust for their brochures on “Traditional Trades” (e.g., signboard engraver, incense maker) and “Traditional Foods” (e.g., popiah skin maker, crepe maker).

I recommend taking a tour of the Cheong Fatt Tze Mansion (also known as the “Blue Mansion,” a doorway is pictured at the top of the post). Cheong Fatt Tze lived an incredible rags-to-riches life — his commercial empire stretched across Southeast Asia and late in his life he was called “the Rockefeller of the East.” His mansion is built using strict feng sui principles, which were explained in an engaging way by the mansion’s tour guide.

While wandering around the island, I also bought a bottle of the soy sauce to which Chubby Hubby awarded an IFFA back in March, Kilang Kicap Kwong Heng Loong. I purchased a bottle of the company’s top quality sauce, but alas, it has fallen into the category of “too good to use,” and has been “resting” in my pantry since I returned.