“Savoy, It Wins You at a Glance. Savoy, Gives Happy Feet a Chance to Dance.”

Standard green and red cabbage are OK, I suppose, but the savoy variety is a vegetable that approaches the level of “exciting.” It’s good in a simple braise — started in melted butter in a medium-high uncovered pan, then cooked until tender over medium heat with a cover (just a few minutes) — but when baked with potatoes, brown butter, sage, leeks, cheese and buckwheat noodles it reaches the realm of exciting. Whether it “gives happy feet a chance to dance” is another matter (see below for an explanation of the post title).

I was reminded of savoy cabbage when I read an article about buckwheat in the Los Angeles Times food section. The article included a recipe for Pizzoccheri, an Italian baked casserole of hand-made buckwheat noodles, savoy cabbage, potatoes, and cheese. The recipe that I have been using for years is in The Greens Cookbook and is much simpler because it uses pre-made dried buckwheat noodles (like Japanese soba) and has additional flavor through the use of brown butter. It’s a delicious combination, one of those hearty, complex dishes that is perfect for the cooler months. It reheats nicely, providing a few lunches in the following days. My adaption of the Greens recipe is below.

The headnote to the recipe in The Greens Cookbook states that the inspiration for the recipe came from a “single line of Waverly Root’s The Food of Italy.” This is probably the line that they were thinking of (found using Amazon.com’s look-inside feature): “A layer of the [buckwheat & white flour] dough, potatoes and leeks is then placed in a buttered oven dish, covered with a layer of grated cheese in melted butter, then with another layer of pasta, of cheese, and so on until the dish is full.”

The title of this post comes from two lines in one of my favorite recordings, Ella Fitzgerald and Louis Armstrong’s “Stompin’ at the Savoy” (on the 1957 album “Ella and Louis Again“). Not surprisingly, the savoy in that lyric does not refer to savoy cabbage. It’s actually the Savoy Ballroom in Harlem, New York, which was the epicenter of the swing movement of the 1930s and 1940s in New York City. It also was the place where Ella Fitzgerald got her first big break, singing for the house band led by Chick Webb. Ken Burns’ epic Jazz documentary has quite a bit about the Savoy Ballroom if you want to learn more. (I tried to find public domain photos of the Savoy Ballroom or Chick Webb’s band, but was unsuccessful. The best I could do was this photo of the Duke Ellington Band from 1943, taken by the remarkable Gordon Parks. I’m sure the Ellington band played “Stompin’ at the Savoy” at one of their hundreds of concerts and recording sessions.).

Update 1: I have tried the recipe printed in the L.A. Times several times. The pasta was not too hard to make — it was really sticky during the kneading, but rolled out beautifully. However, the instructions for heating the casserole after assembly need some serious revision. It says to put the casserole under the broiler for a few minutes after it is assembled to melt the cheese. I followed that instruction and everything but the top layer was cold when I served it. Using the broiler might work if you are able to take the vegetables and pasta directly from the boiling water to the casserole pan, but that’s not so easy.   If you don’t want to time everything perfectly, it would probably work to bake the casserole in the oven for 15 to 20 minutes, like in the Madison recipe shown below.

Update 2: Mark Bittman’s had a recipe for Pizzoccheri in the New York Times. 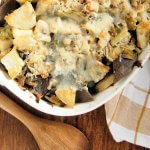 For the brown butter

Cook the noodles and vegetables

Assemble and bake the casserole

Adapted from The Greens Cookbook, by Deborah Madison and Edward Espe Brown