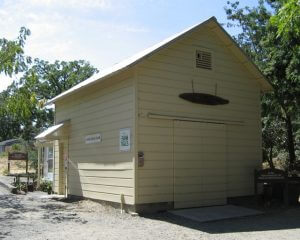 A few weeks ago, I visited Gold Ridge, Luther Burbank’s experimental farm in Sebastopol while touring the wine country and counting the hours until our reservation at Ubuntu in Napa (which unfortunately closed in late 2011).

Luther Burbank may not be a household name, but his work touches almost everyone. Burbank (1849-1926) was a prolific breeder of fruits, vegetables, grasses and flowers. In his over 50 year career, he bred over 800 strains of plants, including the potato used in most fast food french fries (the Russet Burbank potato). He bred many other well-known plants, including the Santa Rosa plum, the July Elberta peach, and the Shasta daisy. Burbank also did a fair amount of selection work, in which he planted fruit varieties from other countries (like the Satsuma plum from Japan) to determine which was most suitable for the Northern California climate. (He is not, however, the namesake of Burbank, California. That honor goes to Dr. David Burbank, a dentist and real estate investor.)

I talked to Carl of Woodleaf Farm about Burbank at the S.F. Ferry Plaza market. Carl told me that although not many of Burbank’s varieties are in use today — generally because they have been improved through further cross-breeding — his influence is tremendous because he taught generations of breeders. Among Carl’s many varieties of peaches is Burbank’s July Elberta (as well as the Fay Elberta, which is in the Slow Food Ark of Taste, the Kim Elberta, and the Gene Elberta).

It’s a fairly small area, perhaps an acre or two, surrounded by an apartment complex. A reconstruction of his barn stands at the entry. A variety of important or interesting plants — most planted long after his death but a few dating back to Burbank’s lifetime — are arranged along a trail with numbered signs that correspond to entries in a self-guided tour brochure.

Among the most interesting were the thornless blackberry and an attempt to create an orange that is hardy in cold climates.

The next photo shows the blackberry — note the smooth vines. The fruit, however, was inferior to standard blackberries, in my opinion.

The next photo shows unripe examples of the trifoliate orange hybrids (Poncirus trifoliata hybrids) that Burbank was investigating. The brochure states that his experiments were unsuccessful because the “[f]uzzy orange fruits have about the same size, hardness and juiciness as golf balls.”

I have a few more photos posted in a Flickr photoset.