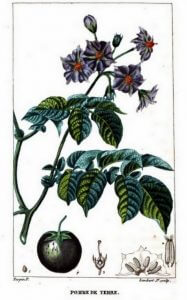 A segment on potatoes with author Raghavan Iyer on the May 13, 2017 episode of Good Food, got me wondering about potato statistics: Where are the world’s potatoes grown?  Which country eats the most potatoes?  Who imports and exports potatoes?

I went looking for answers at the amazing FAOSTAT website, which is a statistical database about food and agriculture from the Food and Agriculture Organization of the United Nations.  They have data for numerous crops, and I quickly found data for potato production, “supply” (the quantity available for human consumption), export and import, and plugged it into Tableau Public to make the maps shown below. The maps should be interactive — move your mouse over a symbol to get its information, zoom in or out, or do other pan and zoom operations (click the right pointing triangle for these). If the blog-sized maps aren’t working for you, I also created an auto-sized version that can be accessed on the full size Spud Stats page.

The third map shows export quantities. France and Germany stand out here, each with more than twice the amount of the third-leading exporter. China’s exports are tiny, less than 1% of the production.

The fourth map illustrates per capita imports, a way of adjusting for population size when looking at the imports. In this view, Belgium stands out, with almost 60 kg per person imported. Belgium is famous for its fried potatoes, so perhaps the imports are necessary to supply demand from residents, tourists and non-Belgian residents (e.g., workers at the EU).

The United Nations declared 2008 the International Year of the Potato and held numerous events around the world, and of course created a web page with all sorts of educational information.  The section about potato biodiversity has this interesting fact: ” The International Potato Centre in Peru maintains the world’s largest bank of potato germplasm, including some 1,500 samples of about 100 wild species collected in eight Latin American countries, and 3,800 traditional Andean cultivated potatoes.” That’s amazing:  3,800 potato varieties!  I rarely see more than 5 at my favorite grocery store, which specializes in produce (Berkeley Bowl Marketplace in Berkeley, California).  (Also, about 10 years ago, purple potatoes were an exotic mainstay of the local Farmers Market, but have since disappeared.  I wonder why…)