The Otis House: When Wilshire Boulevard was Mansion Row in Los Angeles 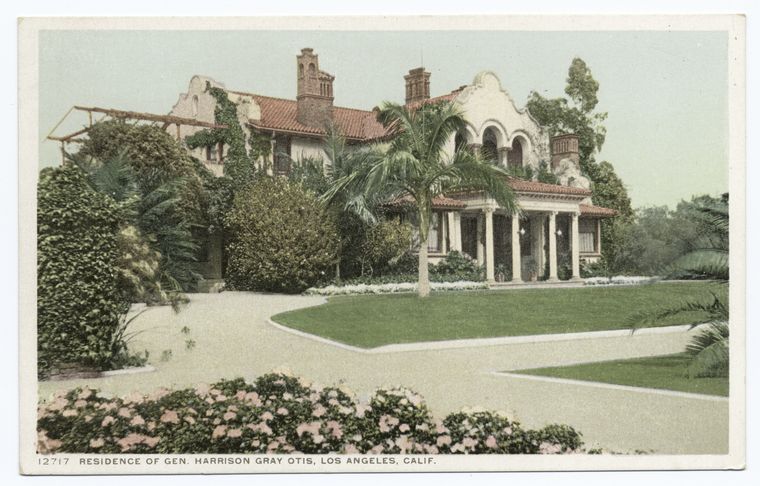 I was browsing through the amazing digital archives of the New York Public Library recently, looking for fun stuff to pin to my Slices of Blue Sky Pinterest boards, and I ran across an old postcard from Los Angeles that caught my attention. The photo isn’t much — it’s a pretty big Spanish-style house — but the name in the caption is huge in Los Angeles history: Harrison Gray Otis. I remembered it from somewhere…cue the harp…. oh yes, it was mentioned in my book review of Wilshire Boulevard: Grand Concourse of Los Angeles.1

Harrison Gray Otis — or, Colonel Otis as he liked to be called — is known as the founder of the Los Angeles Times. He arrived in Los Angeles in the 1880s, when there were only about 5,000 residents. A quarter interest investment in the four-page Los Angeles Daily Times in 1882 led to bigger things (including the Los Angeles Times which was controlled by his family for decades), and eventually he became quite wealthy and powerful in the booming metropolis.

Way back in 1990, the New Yorker had a “Letter from Los Angeles” written by Joan Didion (!) about the history of the Los Angeles Times, which of course had quite a few words about Harrison Gray Otis.  This quote from the article gives a sense of his journalistic tactics:

The Times under Harrison Gray Otis was a paper in which the owners’ opponents were routinely described as “thieves,” “scoundrels,” “blackmailers,” “venal,” “cowardly,” “mean,” “un-American,” “assassinlike,” “petty,” “despotic,” and “anarchic scum.”

Returning to the house, in early 20th century Los Angeles, Wilshire Boulevard had a row of mansions near Westlake Park (now MacArthur Park), and Otis’s place was at 2401 Wilshire2.  Built in 1897, Otis called it “The Bivouac.”  Upon his death, the building was donated to the public and became the Otis Art Institute.  It was demolished in 1956 to make way for larger, modern buildings to house the Institute. Later, the buildings were adapted for use as an elementary school.  The blog Wilshire Boulevard – Historic Los Angeles has a post about Harrison Gray Otis’s house with many more photos of the building.  A recent post about famous lost mansions of Los Angeles from Curbed LA includes the Otis house on its list of 20.