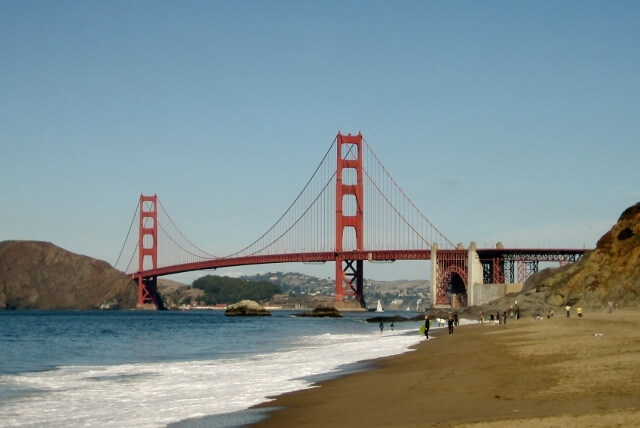 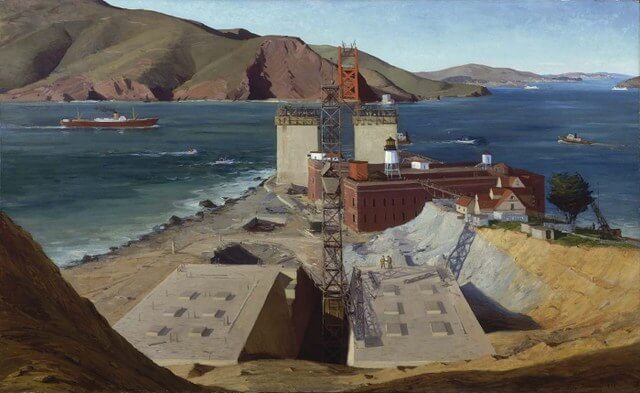 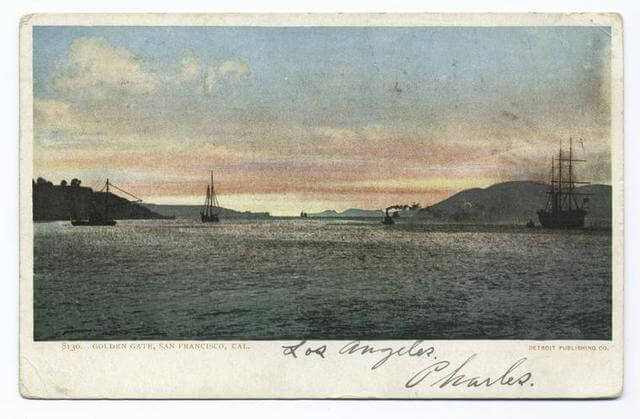 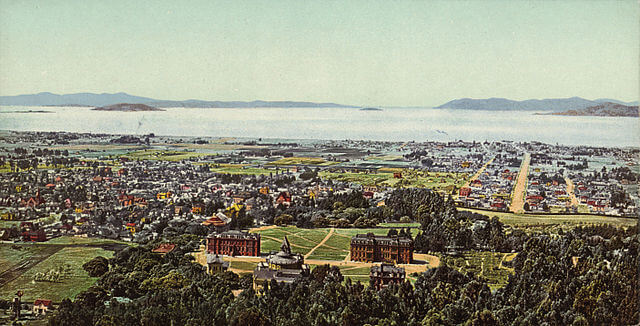 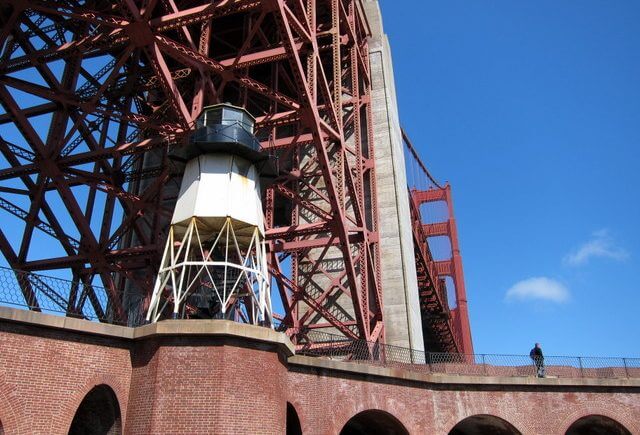 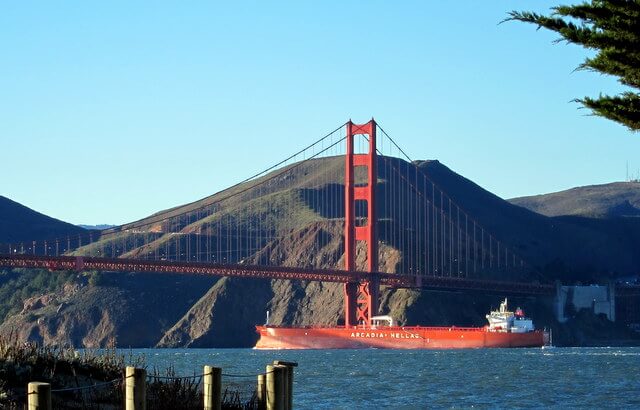 The Golden Gate Bridge is a global icon, a triumph of engineering, and a work of art. In American terms, it was shaped by the City Beautiful movement, the Progressive Era, and the Great Depression. More mysteriously, the Bridge expresses those forces that science tells us constitute the dynamics of nature itself. Like the Parthenon, the Golden Gate Bridge seems Platonic in its perfection, as if the harmonies and resolutions of creation as understood by mathematics and abstract thought have been effortlessly materialized through engineering design.

That’s the opening to Golden Gate: The Life and Times of America’s Greatest Bridge, a concise examination of one of the wonders of the modern world by Kevin Starr (1940-2017). It’s a slim volume, less than 200 pages — a sharp contrast to Starr’s greatest legacy, his monumental 7-volume Americans and the California Dream — that takes an expansive and slightly non-traditional look at this magnificent structure and site. In eleven chapters with one word titles (“Icon,” “Site,” “Money”, etc.), Starr looks beyond concrete and steel to bigger topics like the geological formation of the Golden Gate and San Francisco Bay, how the Golden Gate stayed hidden from the Spanish for years*, and its cultural and artistic meanings — the Bridge as an Icon, as a driver of local commerce, as a catalyst for metropolitan prosperity.

As the population of the San Francisco Bay Area grew in the 19th century, many suggested spanning the bay with bridges — railroads from the east and north stopped on the other side of the Bay, and ferry capacity was limited. One of the most famous proposals was made by Emperor Norton, a colorful and slightly tragic figure of the era, who suggested bridges from Oakland to Yerba Buena Island, then onto Sausalito, and then a less useful connection to the Farallon Islands twenty miles off shore. However, it wasn’t until the 1920s that advances in bridge technology and the growth of the automobile population made bridges a real possibility. The journey from concept to commitment was a long and complicated one, involving intercounty wrangling, ballot propositions, numerous lawsuits (like from the ferry companies that would lose business), and opposition from the military. Starr does a solid job of explaining the key parts, and it is a valuable reminder that big projects have always been complicated and difficult to pull off (it’s not just today).

A central theme of Golden Gate is that this site required a daring solution. The technical challanges were daunting: the designers needed to account for the wide stretch of water, address the need for military and commercial ships to pass underneath, allow the structure to survive major daily tidal flows (one of the highest tidal flows on the planet), and be resistant to salt spray and fog. They also needed design that respected the wonderful site.  Joseph Strauss, a leading Bridge promoter and the Bridge’s chief engineer during construction, initially didn’t understand the importance of aesthetics, proposing a bulky, utilitarian monstrosity — half suspension bridge, half trestle bridge, probably to be painted gray (you can see it at the 3:43 point in a video from NewsHour about the 75th birthday of the bridge).

Eventually, Strauss heeded the heaps of criticism and built a world-class team of bridge designers who could find a better solution. The new design was radical and appropriate:  a single span suspension bridge — the longest the world had ever seen — with a surprisingly thin roadway deck. Starr’s chapter on this part of the Bridge’s history is concise and pays tribute to the designers who Strauss tried to erase from history:  Charles Alton Ellis, a professor at the University of Illinois, who performed myriad calculations to confirm that the design was sufficient, and who was fired by Strauss for unknown reasons after he had finished the calculations; Leon Moisseiff, a Latvia-born bridge designer who had worked on the Manhattan Bridge and Benjamin Franklin Bridge; Othmar Hermann Ammann, a Swiss-born designer who had worked on the George Washington Bridge (he later designed the Verrazano-Narrows Bridge, which had a span slightly longer than the Golden Gate Bridge. This trio, along with UC Berkeley geologist Andrew Lawson, created and validated the Bridge’s towers, suspension structure, roadway, foundations, and so on. Their ingenuity allowed the bridge to be thin and graceful.  The distinctive detailing of towers — its Art Deco flourishes — were the responsibility of architects John Eberson and Irving Morrow. Starr recounts their contributions with some detail, including the somewhat random choice of the color, “International Orange.”

Starr devotes one of the last chapters to perhaps the Golden Gate Bridge District’s largest failure:  suicide.  The beauty of the Bridge and the site have been a deadly attraction for more than 1,300 individuals who have jumped from the Bridge, falling 220 feet into rapidly rushing water. Starr recounts personal stories of some of the victims, the District’s reasons for inaction, and potential fixes.  Anti-suicide ideas have been percolating for years — typically a net underneath the Bridge — and yet, the District (and its local and state allies), have been unable to find the political will to implement a solution until recent years. A page at the District’s website details the last 11 years of progress towards construction of a physical barrier, which might be under construction in the near future.

To sum up, Kevin Starr’s Golden Gate is a quick and interesting study of one of the great engineering, architectural, political and artistic accomplishments of the 20th Century.  It would be a great read for visitors to San Francisco, long-time residents, or anyone interested in public works.

Where to Look at the Golden Gate Bridge

I have lived and worked on the eastern shore of San Francisco Bay (Berkeley, Oakland) for more than 20 years, and so views of the Golden Gate Bridge are common — from the University of California, Berkeley campus, from I-80 and I-580, from the Bay Trail, and various places around Berkeley. Even after so many years, it’s a thrill to glimpse the Bridge. And I still love getting closer for better views.

To be honest, I’m not so crazy about walking or biking across the bridge — I’ve done each mode several times, and find it to be too noisy and crowded — but I suppose that every visitor to San Francisco should walk or bike across at least once, so if you’re visiting San Francisco, by all means, walk or bike the Bridge. However, if you have more time, check out some of these top spots to look at the Bridge (in no particular order):

Note
* You can visit the suspected site of the Spanish explorers’ first view of the Bay inside the Sweeney Ridge section of the Golden Gate National Recreation Area. I’ve done the hike and it is a good one:  a walk through chaparral along the ridge top with long views in every direction (unless it’s a foggy day).

Other Resources That I Found While Writing This

My Other Posts About the Golden Gate