Although pizza baking in the San Francisco Bay Area and other locations (e.g., Sunset’s list) has undergone a renaissance in recent years with higher-quality ingredients, improved techniques, and better ovens, I think that the service side of the pizza scene needs some serious work. I’m not talking about the people who take your order or bring your food, but the way that carefully-made delicacy is delivered to the table.

Recently, I went to one of San Francisco’s top pizza places and the pizza was served on a thin aluminum pan. And so, in the minutes between service and consumption, the crust gets soggy and the quality rapidly drops. One way of looking at this degradation is through charts — a type of pie chart, I suppose — which give a graphical interpretation of how my impression of the pizza’s quality changes over time.

Pizza Pie Charts
To explain my pizza eating experience, I made three charts, using a photo from atduskgreg on Flickr as a background. On each photo of the pizza (from Delfina Pizzeria in San Francisco), there are four black and white bars.  The black part of the bars indicates the quality of that section of the pizza at that moment in time, with a solid black bar being perfection for that particular pie.  There are four bars on each pizza that correspond to the center, inner third, outer third, and edge of the slice.

The first figure shows my opinion of the pizza’s quality at the moment of delivery (your sense of pizza quality might be totally different, of course). The black bars are as high as they will ever be because the crust is crispy across the entire slice. 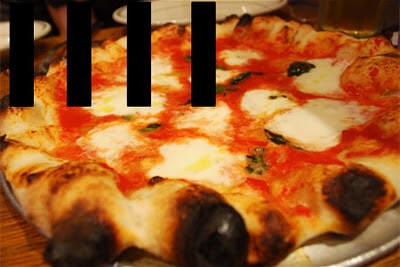 A few minutes later, degradation occurs in the middle of the pizza, as moisture released by the hot crust and toppings lead to the first stages of sogginess in the crust. As you go to the outside edge, however, the quality remains fairly high because there are escape paths for the moisture. 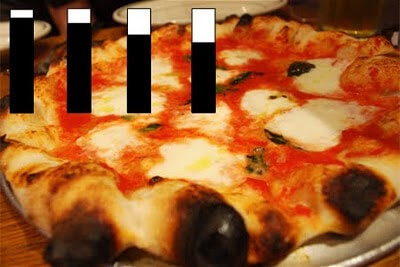 As time goes on, the trend continues, with the center of the pizza degrading faster than the outside. 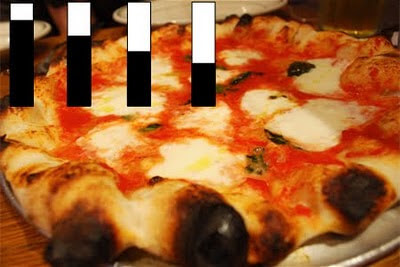 Another way to look at the pizza trends is with an x-y chart. In the chart below, the y-axis is quality of the pizza at a particular location and the x-axis is time (in arbitrary units because I haven’t timed my pizza. Each unit is probably a minute or so.). As noted above, the quality of the pizza drops more rapidly in the center than at the edge. 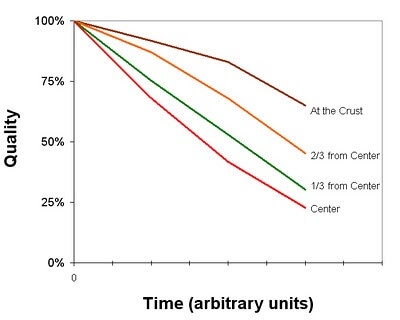 Maintaining Quality
So how can pizza quality be maintained at very high levels for more than a few minutes?

Many slice shops have developed a system that gives the diner high quality: upon receiving an order they take a slice from the display case and pop it into a hot pizza oven for a few minutes to crisp the crust and heat the toppings. But this approach is necessitated by a feature of the slice business: they need to have a lot of ‘inventory’ ready to sell at a moments notice, as not many slice customers want to wait for 10 or 15 minutes for their order. At a place like Delfina, Pizziaolo, or Flour+Water, in contrast, the pizza is made to order and delivered directly from the oven to the table.

One idea that comes to my mind is cooperative ordering: diners at different tables would stage their orders and share partial pizzas. Here’s how it would work in theory: imagine that two couples at different tables are each going to order a pizza. Instead of getting one pie each at the same time, they could arrange for the server to bring the two pizzas to the two pairs in stages: half of the first pizza goes to each table, then each table gets half of the second pizza a little while later. This pizza sharing approach shrinks the time between pizza delivery and pizza consumption, thus hopefully increasing the enjoyment. How a restaurant would deal with this is another matter, as it isn’t trivial to coordinate orders from multiple tables.

Other ideas address how the pizza is delivered. Instead of putting the pie on a basic, non-permeable pan, could a wire rack prevent sogginess?  Or would it cause the pizza to cool down too fast?  Or could a combination of hot bricks and a wire rack like the one pictured below be a solution?  In theory, the heat from the bricks would keep the bottom of the pizza warm while the wire rack allows moisture to escape.  Or would it be a too dangerous?

Or perhaps this is all much ado about nothing… In any case, do your favorite pizza places have any non-standard ways of serving pizza?