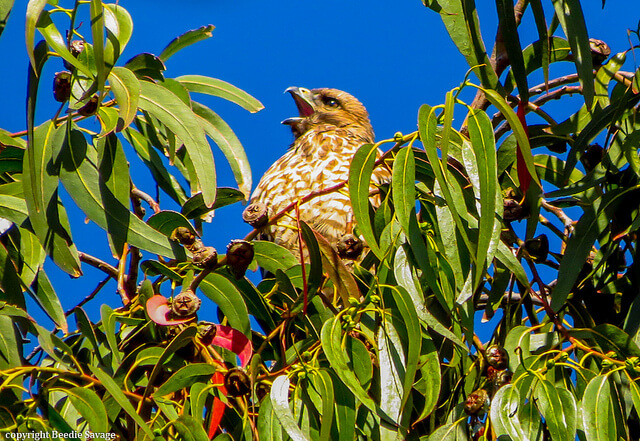 During the long summer days, the hills to the east of San Francisco Bay (Alameda and Contra Costa County) are wonderful places to walk — not too hot and with remarkable views to the east, west, and north (until the fog rolls in, and then it’s grey in every direction). The land in the East Bay Hills was originally open grassland with occasional small stands of trees like live oak, madrone, and willow. Most of the year it was “golden”, but after the winter rains the grasslands exploded with the colors of wildflowers among the green grass. Today, however, the hills are covered with eucalyptus trees imported from Australia. So how such a concentration one type of tree come to the hills Berkeley and Oakland? The July-September 2005 issue of Bay Nature had a fascinating story by Bill O’Brien about how it happened. It is a tale of optimism, hard work, greed, and how nature can wreck humanity’s plans.

But first, why should anyone care? While many imported plants behave nicely and stay in the region they are planted, others rapidly expand their range and out compete the natives. The Nature Conservancy’s Invasive Species Initiative says this about non-natives:

Invasive species damage the lands and waters that native plants and animals need to survive. They hurt economies and threaten human well-being.  The estimated damage from invasive species worldwide totals more than $1.4 trillion – five percent of the global economy.

Eucalyptus trees are ecologically problematic and notoriously flammable (they tend to explode when they burn and flaming pieces of bark can be carried long distances by the wind). Stands of eucalyptus tend to be less diverse than native lands, but by no means devoid of natural life. In the Bay Nature article, O’Brien writes that ” A recent study by biologist David Suddjian counted more than 90 bird species that make regular use of Monterey County eucalyptus habitats, including at least 59 species that nest in them. Eucalyptus trees on the shores of San Leandro’s Lake Chabot host a large heron rookery. In Santa Cruz County, Suddjian found that great egrets, great blue herons, and double-crested cormorants nest exclusively in eucalyptus.” And at Ardenwood Historic Farm in the southern East Bay, monarch butterflies use eucalyptus for shelter and sustenance as they over-winter in the Bay Area. The trees are remarkably resilient, so removal of the forests is not easy: chop one down, and the next season the stump be covered with vigorous new shoots.

Almost all of the eucalyptus in the East Bay Regional Park District can be traced to a company founded by Frank Havens (1848-1918). Havens was one of the early builders of Oakland and Berkeley, most notably public transportation and utilities. He was also a partner in the company that built the Claremont Hotel. At various times he worked with Francis “Borax” Smith, who originated the Twenty-mule-team borax product.

Havens founded the People’s Water Company in 1906, with holdings that stretched from Richmond to San Leandro. In 1910, his Mahogany Eucalyptus and Land Company started planting seedlings. Since California had little native hardwood and the population was rapidly growing, Havens’ goal was to create a local source of lumber (and revenue, of course). Eucalyptus was thought to be ideal because it was fast growing and the trees coppice readily (i.e., sprout shoots from a cut stump), thus reducing the need for replanting. Somewhere between one and three million seedlings were planted in the East Bay hills between 1910 and 1914. Havens’ firm also built 9 plant nurseries, a sawmill, and arboretum. During the peak planting season the company employed as many as 200 people.

Havens’ dream died quickly — he shut it down in 1914, just four years after starting the project. Although the trees grew rapidly, they were unsuitable for lumber because they were difficult to plane without chipping and the wood cracked while drying. The article does not give a definitive reason for the failure of the project, but some have theorized that the mild Bay Area climate and lack of natural pests caused the trees to grow too quickly, which led to wood characteristics that were different than those found in Australian trees.

Like many other get rich schemes in California (hydraulic mining, for example), a short burst of activity had long-lasting impacts on the ecosystem, ones that we are still dealing with many decades later.