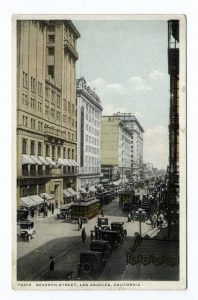 But if you’re a true fan of advertising or cars, here’s a tour that might appeal to you:  Los Angeles car commercial filming locations.  Because of the good weather, the variety of locations, and the collection of film-making talent, Los Angeles is the location for many commercials.  As I watch the car commercials, I notice major and minor L.A. landmarks in the background, such as the downtown skyline, the tunnels in the northern downtown area (e.g., 2nd St between Figueroa and Hope), City Hall, Disney Hall, the bridges over the Los Angeles River, and others.

I have collected a few screen captures from YouTube over the years, and identified most of the locations (this has been a long-term, and mostly pointless, obsession for me). I even made a map:

A 2014 Nissan Sentra commercial has shots from the 5th Street over-crossing of the 110 freeway just north of the downtown core.  (All of the links are to Google Maps, which has the street view tool that will let you look around on your own.)

A single commercial for the 2015 Chevrolet Colorado (Truck of the Year!) had two downtown Los Angeles locations.  The first was identifiable because the Westin Bonaventure Hotel is in the background, so I determined that the truck was headed NE on Figueroa at W. 3rd Street.  (The hotel has been in quite a few films and television shows — the IMDB listing for the Westin Bonaventure Hotel has 33 entries.  My strongest memory of the building in film is in the 1993 film, In the Line of Fire.  Another interesting note:  the building was designed by the firm that designed Detroit’s iconic Renaissance Center, and its interior is similarly confusing and maze like, but much, much bigger.)

The second location is on S. Grand at W. 6th Street, with the building on right being the identifiable feature (609 S. Grand. Note: this is very close to the excellent BS Taqueria with its delicious beet torta).

The bridges across the Los Angeles river/concrete channel are quite popular for car commercials.  They offer a wide open road, easy crowd control, and a background of the downtown skyscrapers.  Below is a recent commercial for the all new Volvo S90, in which the car drives across the 4th Street Bridge
I’ve annotated the screen capture to point out the two distinctive buildings that I noticed.

One of the images that was bothering me for a long time (and was one of the reasons this post has been simmering in Drafts for so long), was the “crows” commercial for the 2015 Acura TLX.  Something about that image screamed “historic downtown L.A.”, but I couldn’t recall its location.  I finally went to Google Image search — “downtown Los Angeles buildings with columns” — and it was on the list.  The building turns out to be the Farmers and Merchants National Bank  building at 401 S. Main Street., which was built in 1905 (more about the Farmers and Merchants National Bank from Water and Power Associates.).

Of course, many car commercials are filmed elsewhere, like the next one, which is from Austin, Texas: the Congress Avenue bridge (the “bat bridge”), which is world famous for its nightly bat flyouts.  I recognized it because I once stayed there while in town for a conference.

The celebrity house tour was the core of a hilarious “I Love Lucy” episode.  Soon after the Lucy, Ricky, Fred and Ethel moved from New York to Los Angeles, Lucy and Ethel go on a bus tour of celebrity houses in Los Angeles, Hollywood, and Beverly Hills. While stopped to view Richard Widmark’s house, Lucy spots a grapefruit tree with ripe fruit hanging on its branches.  Of course, she has to have one, and she and Ethel hop off the bus, Lucy tries to get a grapefruit, and chaos ensues, including one of Lucy’s best sight gags (the one involving a rug).  (I Love Lucy, “The Tour”, season 4, episode 30).

In the bleak, surrealistic, and witty BoJack Horseman, the hapless and hilarious Todd gets caught up in a tour scam.  While BoJack and Diane are on the East Coast, Todd launches the “David Boreanaz House” after a tour bus stops outside of BoJack’s house and the tour guide mistakenly says that BoJack’s house is where David Boreanaz lives (Season 1, Episode 5, Live Fast, Diane Nguyen, starting at 5:00).