The First Taco Recipe in English

I’m reading Gustavo Arellano’s Taco USA, a deluxe combo platter of history, personal stories, and culture. Something from the taco chapter that jumped out at me was a mention of the first taco recipe in English.  Arellano claims that it was in the California Mexican-Spanish Cook Book, a 1914 book by Bertha Haffner-Ginger.

Haffner-Ginger grew up in the Midwest, and somehow made her way to Los Angeles. There she became a teacher in the Los Angeles Times School of Domestic Science. On one of her walks to a nearby area with Mexican restaurants and food factories (“Sonoratown”), she decided that it would be fun to teach some classes on this cuisine.  The classes eventually turned into a cookbook.  At the end of the tortilla section, she includes that first-ever taco recipe and photo: 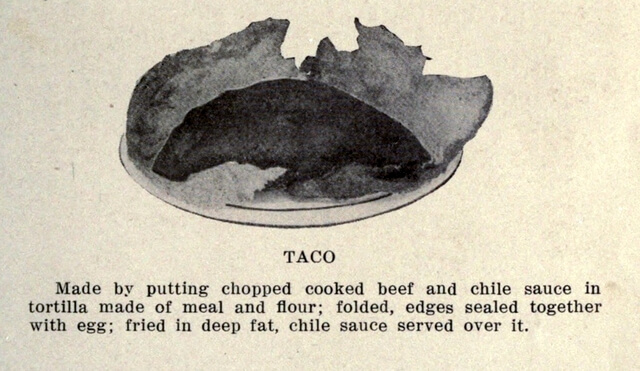 The sketch of a recipe — “TACO – Made by putting chopped cooked beef and chile sauce in tortilla made of meal and flour; folded, edges sealed together with egg; fried in deep fat, chile sauce served over it” — is not what you’d get if you order tacos in most Mexican restaurants. I’m not sure what they would call the above creation. 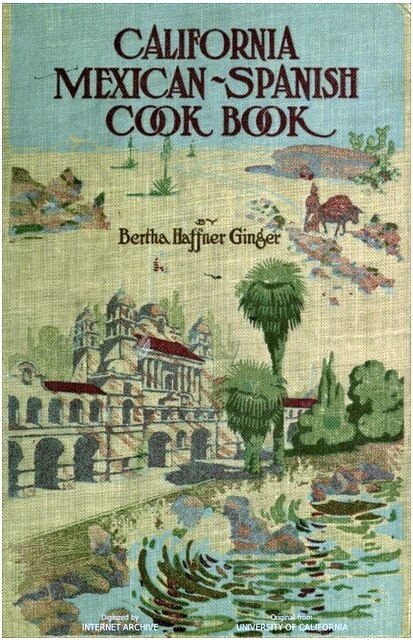 Image credits
Cover of book and taco recipe from the California Mexican-Spanish Cook Book, by Bertha Haffner-Ginger , 1914.  All from at Hathi Trust.