A Curry Powder Recipe from 1818

On one of the rare occasions when the Bloglovin’ web interface works with my complicated browser set-up, I ran across a fascinating piece of data visualization. It was a Data Visualization of Eight Flavors from the Four Pounds Flour blog in which the author used the Google Ngram Viewer to highlight the eight flavors in her new book, Eight Flavors: The Untold Story of American Cuisine.  One of the flavors is curry powder, and here’s an Ngram for curry powder:

I was initially surprised by the 1800-1820 blip, but after a little thought it makes sense:  the spice trade between India and Europe has been active since antiquity; British business interests in India began in the 17th century, and one of the outcomes of Britain’s colonialism was the creation of a new thing called “curry powder” that was exported to Britain, Europe and the United States.  So it follows the some books from long ago would mention curry powder.

My next destination was Google Books to search for old curry powder recipes. The oldest U.S.-published curry powder recipe that I found was from 1818, in The Universal Receipt Book: Being a Compendius Repository of Practical Information in Cookery, Preserving, Pickling, Distilling, and All the Branches of Domestic Economy.  To Which is Added, Some Advice to Farmers, by the aptly named Priscilla Homespun (I also found one in a London-published book from 1810.  A tweet from Nik Sharma alerted me to a chicken curry recipe in The Art of Cookery Made Plain and Easy, by Hannah Glasse from 17671 and a 1784 advertisement for curry powder). 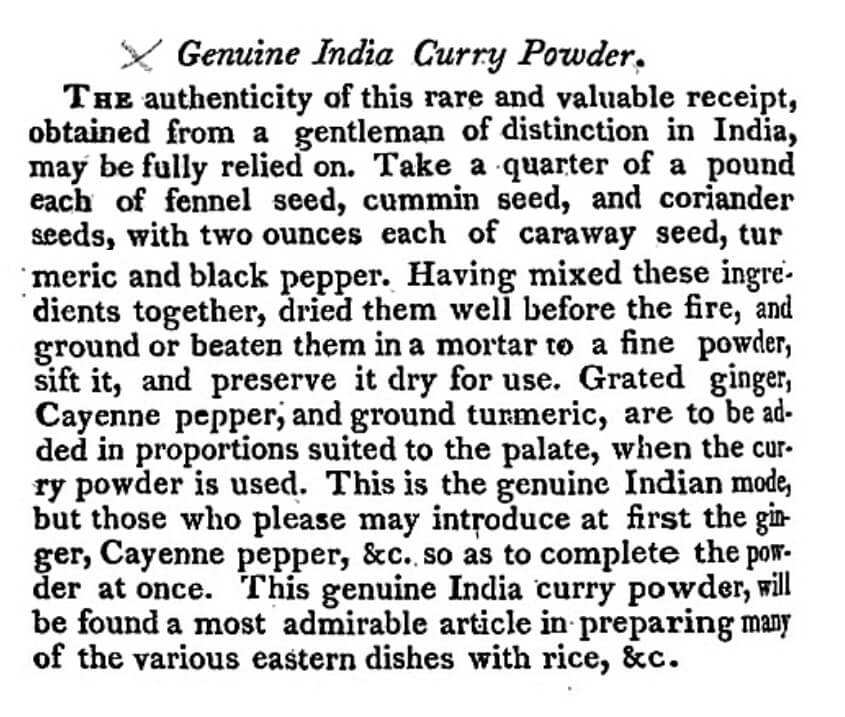 The “receipt,” which was “obtained from a gentleman of distinction in India,” makes a lot:  more than 18 ounces. If that’s too much and you want to try making your own 200-year-old curry powder, use the following proportions:

The years haven’t changed curry powder formulas very much — this looks a lot like curry powders I have made in recent years (though it’s worth noting that the vast majority of the Indian recipes that I use don’t rely on curry powder, but have a specific spice mixture).

While looking through the book, I ran across something that fellow bloggers might find fun.  It’s a publication notice from a government official, and the interesting part is its “blockquote,” which uses quotation marks on the left margin to indicate the extent of the quotation. 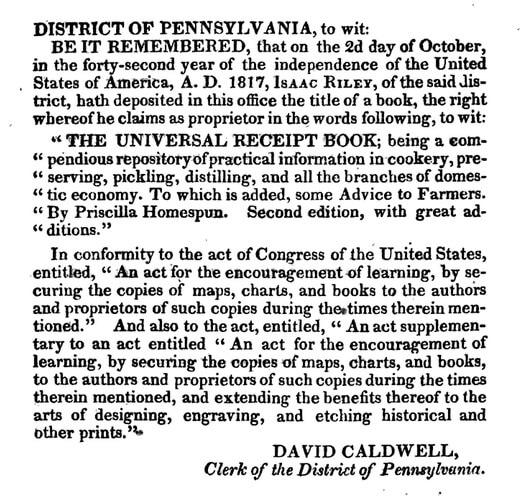 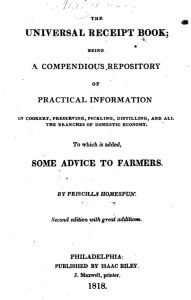 The Universal Receipt Book: Being a Compendius Repository of Practical Information in Cookery, Preserving, Pickling, Distilling, and All the Branches of Domestic Economy.  To Which is Added, Some Advice to Farmers, by Priscilla Homespun, published by Isaac Riley (Philadelphia), 1818. (via Google Books).