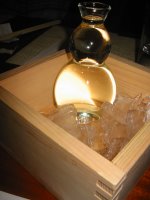 Last week I attended a special program arranged by the Japan Society that was a collaboration between cookbook author Elizabeth Andoh and the Medicine Eat Station in downtown San Francisco (which closed not long after this event).

The inspiration for the event was Ms. Andoh’s new cookbook, Washoku. But after hearing her speak, I think the word “cookbook” is too limiting, as Andoh seems to be presenting a way of thinking, a way of moving, a way of organizing in the kitchen and beyond. After a few diversions, I’ll get back to the event.

In an interview in the SF Chronicle, Elizabeth Andoh explains washoku:

For more Elizabeth Andoh on-line, consult her writings at the Tokyo Food Page, or her Taste of Culture website. 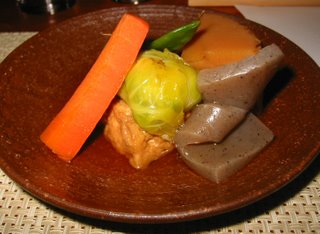 I was initially put off by the restaurant’s name of Medicine, because to me that word is something to be avoided—it’s what you take when you are not well. But the more I think about it, the more the name makes sense. The food system in the U.S. is clearly not well, and it needs serious treatment. The sickness goes across the entire span from the farmer (overuse of pesticides, agribusiness overconsolidation, GMOs), to the marketers (gimmicks and junk), to the consumer (obesity, forgetting where food comes from). With this in mind, a healthier, more sustainable way of eating—or “loving kindness to your body”, as the Medicine motto goes—would be a step towards recovery. 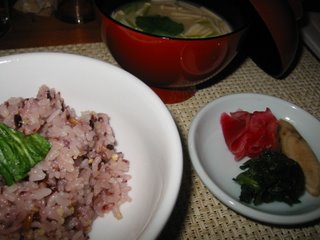 The event was a multicourse vegetarian shojin-style meal, in which Andoh had collaborated with the restaurant staff to create an appropriate menu. Jennifer of Life Begins at Thirty wrote an excellent description of the event and the washoku philosophy at the Bay Area Bites blog. Her description of how groups of five define washoku is quite good (color, ways of cooking, tastes, senses). While browsing through my copy of Donald Richie’s out of print A Taste of Japan for his thoughts on “negative space” in Japanese cuisine, I found yet another group of five: