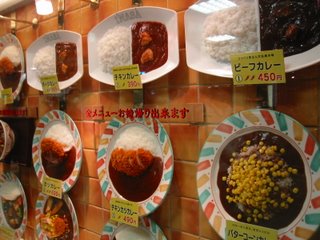 “Curry rice” is everywhere in urban Japan: in the train stations, in the grocery store, in office cafeterias. Curry has been known in Japan for almost 150 years, but has only been a staple since about 1931. The Lonely Planet World Food Japan book (out of print) recounts some of the history of curry in Japan. One of a group of Satsuma military officials who were traveling to France on a French warship in 1863 watched some Indian passengers cooking what was described as “aromatic mud.” During the Meiji period, Japan opened up to the West, and curry is one of the items that flowed in. Initially, curry rice was a luxury food, probably because of its foreign and exotic nature. In 1931 the British company Crosse & Blackwell began selling a mass-produced curry rice mix in Japan that became a great success, and by the early 1980s the average household ate almost 2 kg of curry mix each year. (Some notes about the origin of the word “curry” are in my archive.) 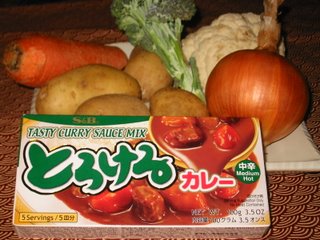 I spent quite a while searching on the internet for a recipe for curry rice from whole spices and unprocessed ingredients, but was unsuccessful. Every article or blog-post about curry rice relied on pre-packaged “curry roux” to make the sauce. Perhaps this is only logical, since curry rice is just a simple convenience food and not something to be appreciated like a fine Indian stew.

The package contains a block of reddish-brown paste which is made up of dehydrated vegetables, curry powder, various oils, and other flavorings. I used 4 ounces cauliflower, 4 ounces of carrot, 1.5 ounces broccoli, 12 ounces of potato, and 7 ounces yellow onion, some vegetable oil, some water, and one box of curry mix to make a batch (Unit conversion page). I sauteed the vegetables in oil for a few minutes until they were lightly browned, added water to cover, then put a lid on the pot and let it simmer until the vegetables were tender. To finish the dish, I added the contents of the curry package to the pot and gently stirred the mixture for a few minutes until a smooth sauce had formed. 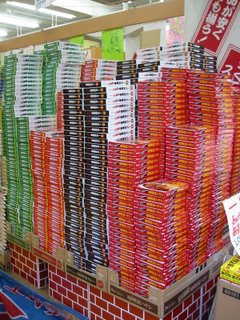 The Japanese-style curry was easy to make, but I give it a pretty low rating in terms of flavor and nutrition. The sauce was smooth—thanks to the industrially ground curry powder and other additives—and had a rich, pleasant flavor. But even though the box was labeled “medium hot”, I found it to be rather bland. Finally, the mix was full of nasty ingredients like palm oil and MSG. I definitely will not buy this type of curry mix again. With a little bit of experimenting with the spices in my cabinet, I’m sure I could make a similarly flavored curry sauce using a freshly-ground masala, and a freshly made roux of flour and oil to create a smooth sauce.