A Few More Photos and Words about Japan

My short trip to Japan provided a lot to blog about, and I think I have finally run out of material (at least until I buy the Washoku cookbook and start cooking my own Japanese cuisine). This will be a mix and match post to bookend the first one.

The object in the photo to the left is a sakura-mochi, a sweet (okashi) that is made before and during hanami, the period of cherry blossoming across Japan. The item consists of a center of lightly sweetened adzuki bean paste around which a piece of cooked glutinous rice flour and a cherry leaf have been wrapped. The inside is what I expected from a Japanese sweet: gooey and light in flavor and sugar. And although it felt somewhat odd to eat the leaf of a cherry tree (i.e., we eat the fruit of the tree, not its vegetation), the cherry leaf had a distinctive flavor. It seemed to have been lightly pickled in a sugar-salt solution, which gave my mouth an unexpected sensation to go with the subtle cherry flavor of the leaf.

The written language of Japan makes it a challenging place to travel, as there are so many characters and they do not lend themselves to looking up in a dictionary (I wouldn’t even know where to start). And it turns out that words aren’t only challenge, as some establishments use characters to represent numbers too. The photo of the menu to the left is one of the pages of drinks at an izakaya (a casual pub-like restaurant) near the Shinjuku station. The large, bold characters in the yellow box are the prices of each drink, by the glass and by the carafe. Zero, one and two are easy to identify, but then it gets trickier. But since there are only 8 more characters needed to complete the 0-10 collection, a quick reference card is a manageable proposition. 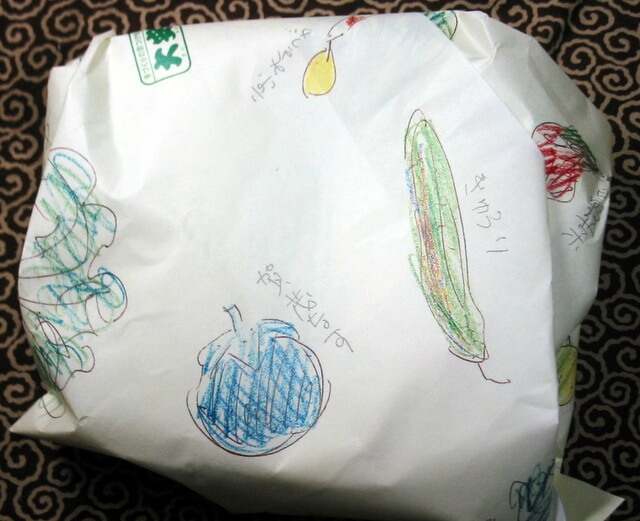 The photo above shows a wrapped package of Japanese pickles (tsukemono) from a department store (photo of the stand). The paper includes a poem:

After seeing an exhibit of Japanese painting at the Asian Art Museum of San Francisco, the concept of negative space was prominent in my mind:  could the absence of a certain flavor act to heighten the flavors already present? It seemed like a somewhat half-baked idea, but a few months later, I was surprised (and validated) to find a discussion of negative space in Japanese cuisine in Richie’s A Taste of Japan:

Asymmetrical aesthetics also apply in the way in which food is placed in relation to the surface area of the dish itself. Let us say something roundish—a fillet or a teriyaki-style fish—is to be served. It will appear on a long, narrow, flat dish. Resting against the fish, and extending the length of the dish will be a single stalk of pickled ginger. An asymmetrical balance has been created in which the negative space (the empty part of the dish) serves as balance to the positive (fish-filled) and is accentuated by the single line (pickled ginger), which intensifies the emptiness and, of course, by so doing also intensifies the succulence of the fish.

That such aesthetic considerations should extend to food surprises the West. One is used to Japanese concepts of negative space in such arts as sumi-e (black ink painting) or ikebana (flower arranging), but to see such ideas in the kitchen strikes us as odd—as though Poussin’s ideas on the golden rectangle should be made apparent in the way a quiche is sliced.

But this just goes to show how very different Japanese ideas on food are. And there are many more aesthetic considerations common in Japanese cuisine as well. For instance, there is a general law of oopposites, which has nothing in common with food presentation elsewhere. Foods that are roundish in shape (small dumplings, ginkgo nuts, small fillets) are served, as we have seen, in dishes having straight lines, while foods which are straight (square-sliced vegetables, blocks of tofu) are always served in round dishes. (from page 9)

Since it is cherry blossom time in Japan (and in many other places), I’ll close with a photo and some links to blossom art. Above is a photo of a manhole cover in Ueno Park, one of the most popular places to view the blossoms in Tokyo.