In the days before I took Shuna Lydon’s caramel class a few months ago, I studied the sugar chapter in Harold McGee’s On Food and Cooking so I could have a foundation that would help me absorb her teaching. I was surprised to learn that caramel is not only delicious and a culinary challenge, but also contains antioxidants, which seem to be one of today’s miracle nutrients. On page 657 (of the latest edition), McGee writes (my emphasis):

The aroma of a simple caramelized sugar has several different notes, among them buttery and milky (from diacetyl), fruity (esters and lactones), flowery, sweet, rum-like, and roasted. As the reactions proceed, the taste of the mixture becomes less sweet as more of the original sugar is destroyed, with more pronounced acidity and eventually bitterness and an irritating, burning sensation. Some of the chemical products in caramel are effective antioxidants and can help protect food flavors from damage during storage. 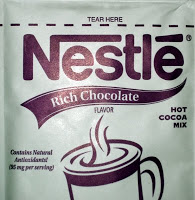 Some time after reading that, I thought I could use this new knowledge about caramel (as well as some of the skills I learned in Shuna’s class) to make a super-antioxidant drink. Other ingredients could be the hot chocolate mix provided at my office — which “Contains natural antioxidants! (95 mg per serving)” — and company-provided black tea — which has “175 mg protective antioxidants.” The caramel would come in the form of home-made caramel sauce. 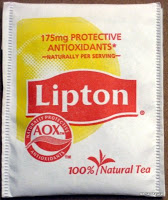 Perhaps this wild combination of tea, hot chocolate mix, and caramel sauce will give me super-office powers — or at least help me stay awake during marathon engineering meetings (if the initials FMEA mean anything to you, you know what kind of meeting I’m talking about).

But probably not, because the drink is pretty bad: too sweet and reeking of an instant hot chocolate aroma that I don’t enjoy.

Here’s what I did to make my first (and only?) Carteacho:

Although it is conceivable that caramel, black tea and cocoa/chocolate could be combined into a delicious drink or snack — Recchiuti Confections, for example, makes a delicious Earl Grey chocolate — when it comes to antioxidants, I think I’ll take McGee’s advice:

Each plant part, each fruit and vegetable, has its own characteristic cluster of antioxidants. And each kind of antioxidant generally protects against a certain kind of molecular damage, or helps regenerate certain other protective molecules. No single molecule can protect against all kinds of damage. Unusually high concentrations of single types can actually tip the balance the wrong way and cause damage. So the best way to reap the full benefits of the antioxidant powers of plants is not to take manufactured supplement of a few prominent chemicals: it is to eat lots of different vegetables and fruits. (page 257, emphasis in original)

Appendix
McGee’s latest edition of On Food and Cooking is sprinkled with word histories. For caramel, he writes that the word first appears in French in 19th century and appears to be borrowed from the Portuguese word caramel, which referred to both an elongated loaf of unrefined sugar and an icicle. The Portuguese word derives from the Latin calamus, which means “reed.” There are other connections between this word and vegetation: in Greek, the word kalamos meant “straw”, and the original Indo-European root for the word means “grass.” So it seems that the shared color of dried reeds and cooked or unrefined sugar led to the word that we use today.