When nights are long and cold, I often crave mushroom-barley soup. Thick, richly flavored, nutritious and texturally interesting, yet relatively easy to make. Although barley is what I have used in the past, lately wheat berries have been my grain of choice. Wheat berries are the whole grain kernels that can be milled into flour. Unmilled, they can be used like many other grains.

For one reason or another, several farms in Northern California — Eatwell, Full Belly, and Massa — have been growing wheat for the past few years. Some sell only the berries, while others sell milled whole wheat flour. I’m not sure why Massa and Full Belly grow wheat, but Eatwell Farm’s decision to plant it was stimultated by their chickens. As I explained at Eat Local Challenge, the farmer realized the incongruity of claiming that his eggs were ‘local’ while buying imported organic chicken feed.

You can probably adapt your favorite mushroom-barley soup recipe to use wheat berries — but because wheat berries are a lot heartier than most barleys (especially the pearled variety), you’ll most likely need to cook the soup longer than the recipe indicates. Or, if you don’t have a favorite, below is a rough recipe for the soup that I make.

3/4 cup wheat berries
1 medium onion, minced
2 cloves of garlic, minced
3/4 pound white or brown mushrooms, chopped finely
1 cup diced tomatoes (fresh or from a can)
A few cups of water or vegetable stock
Herbs to taste – one or more of rosemary, thyme, marjoram, oregano
Salt and black pepper to taste

Rinse the wheat berries, place them in a heat proof bowl or a pan, then cover with boiling water. This will let them start cooking while you prepare the vegetables.

In a medium saucepan, cook the onion in a few tablespoons of oil (or butter) over medium heat until it is soft, stirring frequently about 5-7 minutes. Add the mushrooms. As they cook, they will release some of their liquid. Keep cooking, stirring often, until all of the liquid has been released, then cook for a few minutes more to lightly brown the mushrooms. (Sometimes I need to add extra oil during this process.) Add the garlic and cook for another minute.

Add the tomatoes, stock and wheat berries (and their soaking liquid) to the vegetables. Add the herbs, salt (about 1-2 teaspoons) and pepper. Bring to a boil, then lower the heat to medium-low and cook, partly covered, until the wheat berries are tender. 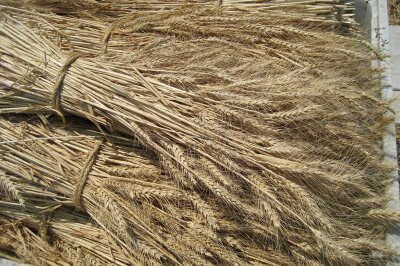 Stalks of wheat at Eatwell Farm

Random link from the archive: Mycology Lessons at the SF Food Bank