Understanding the mind of a litterbug 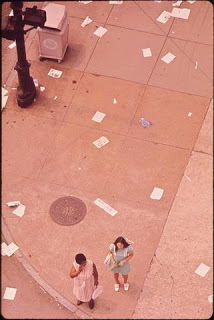 I’ve often wondered about the minds of litterbugs. What makes someone drop a piece of garbage on the ground instead of disposing of it properly?

A recent article in Science magazine shows that a litterbug might be responding to signals from the surroundings. The article itself and a short summary require a subscription to the magazine, but the San Francisco Chronicle published a story about the research.

The researchers — Kees Keizer, Siegwart Lindenberg, and Linda Steg from the University of Groningen in the Netherlands — aimed to test the famous “Broken Window” theory of George L. Kelling and James Q. Wilson (the Atlantic Monthly has an article from March 1982 from the pair). Although the theory has been embraced by many police departments and municipalities, attempts to definitively prove it have been mostly unsuccessful.

The authors of the paper designed several experiments that could test if people would be more likely to steal or litter in an environment where other rules were being broken — litter in an area with lots of graffiti, for example. In these cases the norm-breaker is not exactly copying a behavior but instead is allowing inappropriate behavior reduce his or her interest in following societal norms. The authors call this the “cross-norm inhibition effect,” and claim that it causes a spread of disorder within a society (more “broken windows”).

Several field experiments were conducted in Groningen, Holland using the general public as their subjects. In each case, the ‘subjects’ had no idea that they were part of an experiment. 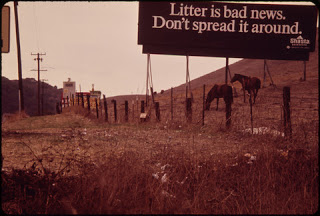 The paper describes four other studies involving whether a failure to return shopping carts causes littering, whether the sound of illegal fireworks causes littering, whether litter would cause people to take an envelope showing that it contained a 5 euro bill that was half-inserted into a mailbox, and whether litter and graffiti would cause people to take the envelope. In each study, the disorderly condition led to more disorder (by a factor of two or three).

The authors conclude that if one norm-violating behavior becomes common, it will increase other types of norm-violating behavior, thus spreading disorder. Therefore, it’s important to address bad behavior as soon as it is observed, otherwise it can spread to other behaviors. In other words, it might not be enough to simply fix the broken windows, but might require additional work to remove graffiti, pick up litter, reduce illegal parking, and so on.

The “cross-norm inhibition effect” demonstrated by the studies seem to explain a fair amount of the littering I see, but not certainly not all of it. There could be other factors, like the number of people that pass through the area each day (e.g., 16th and Mission in San Francisco), or whether the residents have an ownership stake in the area. An example of the “no ownership stake” condition is the student-dominated neighborhood south of the U.C. Berkeley campus, which is always strewn with litter, abandoned couches, and so on. Very few of the students are property owners or long-term residents, and therefore might not care about keeping the area clean. But I doubt it’s that simple and someday I’ll need to go digging in the library for other research on this subject (while also striving to keep the area in front of my apartment litter free — if everyone kept the area around just their home or business clean, we’d have far much less of a litter problem).

Anti-litter billboard along I-580 near San Francisco (circa 1972) from U.S. National Archives’s Flickr collection, photograph by Erik Calonius, no known copyright restrictions.