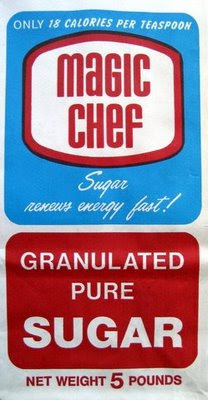 Here’s something from the marketing time capsule.  An old, empty bag of sugar appeared in the workshop at my office, on a workbench between bolts, wrenches and various pieces of metal tubing.  I asked around, and found out that the bag came from  a nearby parts supply store that uses surplus bags to package the hardware they sell.

The slogan in the middle of the bag — “Sugar renews energy fast!” — quickly caught my attention.  Based on the slogan, I’m guessing that it is several decades old, possibly from the early 1970s, just before healthy eating started to become more mainstream.  The “18 calories per teaspoon” message at the top of the bag, however, is somewhat contradictory to the energy renewal idea, so perhaps there was a compromise in the marketing department or one philosophy was going out while the other was comng in.

There are no dates, copyright or anything like that, only a “Patent No. 2,978,164” near the top of one side of the bag.  Patent number 2,978,164 was issued to the Bemis Bro. Bag Company of St. Louis on April 4, 1961, with an expiration date of 1978, which makes it highly unlikely for the bag to be from before April 1961.  The lack of any nutritional information might be another indication of when it was printed (but I don’t know when foods were first required to have such information on the label).

I happened to buy a bag of C & H sugar the other day, and, except for clearly stating that it contains cane sugar,  it was free of slogans or other sugar marketing information.  The “cane” specification is somewhat interesting, given that all refined sugar is basically the same if the refinery is worth its salt (so to speak). In any case, any information is welcome, as it helps the eater make a more informed decision.