On my recent trip to Asia, my family chose Bali as one of our side trips for several of reasons — its distinctive culture, the beautiful scenery, and accessibility from Singapore among them.  Beaches were not one of the reasons, so we gravitated towards the inland town of Ubud, one of the cultural centers of the island and a magnet for expats for decades. Tourists have certainly discovered it and so much of the commerce along the main streets is geared to keeping them fed or meeting their shopping needs. When it came time to eat, that was certainly convenient, as it provided us with delicious food, good food safety practices, and menus in English. However, I found it a little disconcerting to have so much of the main street and side streets be dedicated to the tourist trade.

Fortunately, we got to spend part of a day far from the tourist paths, on a bicycle tour run by Banyan Tree Cycling Tours.  We learned about them through the internet, and I’m really glad that we did.  It was an excellent day and gave us a glimpse of the island’s ‘real’ culture.

The company picked us up from our hotel in Ubud at a relatively early hour and then took us on a one hour drive to the village of Pecung.  This long drive was necessary to raise our elevation and enable the tour to be mostly downhill.  We ate breakfast at a restaurant overlooking rice fields and slopes of mountains. Then, back in the van for a short trip to the start of the bike ride. 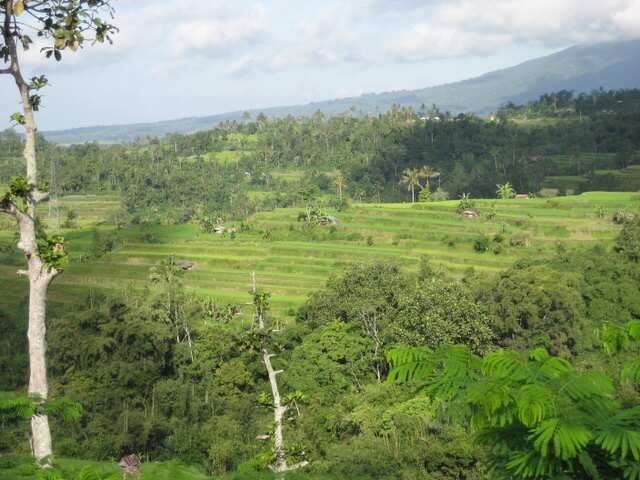 For the most part, we rode on quiet rural roads like the one below, where you’d go for long periods without seeing a car or truck. 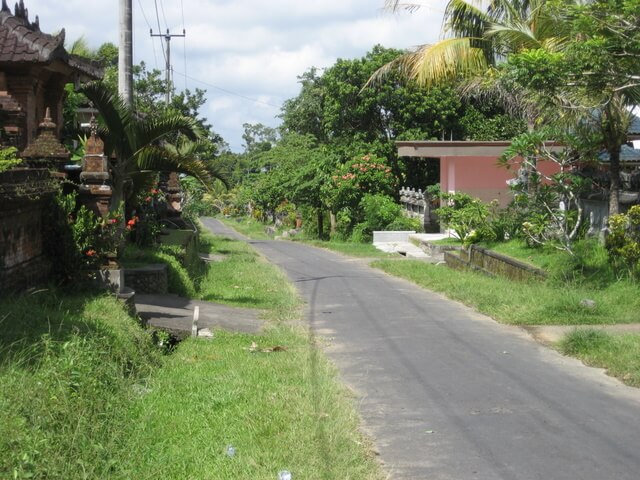 During the several hour bike ride, we made a few stops to learn about Balinese culture, rice cultivation, and religion.  The first stop was at a “typical” Balinese family compound to see an everyday residence.  Their garden really caught my attention:  it included a cacao tree, a nutmeg tree, vanilla bean vines, and other tropical delights.

This next photo shows part of a temple, decked out for a special celebration (the nature of which I don’t recall). The fluttering flags were quite beautiful against the lush greenery and blue sky. 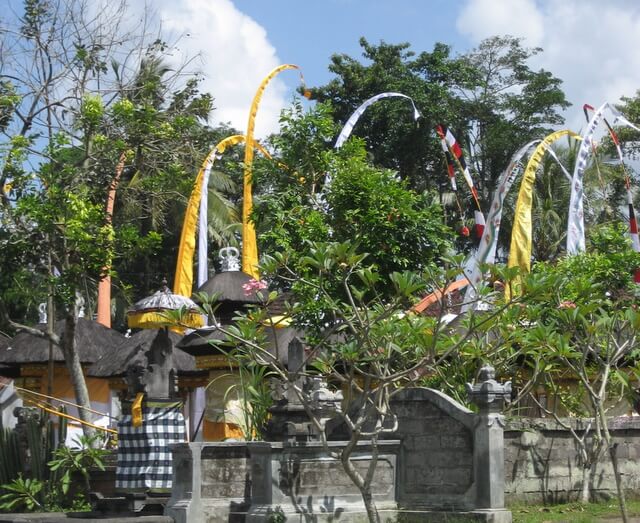 Rice is an important part of Balinese culture — a significant portion of the island is used for rice cultivation, often in dramatic hillside terraces — and so the tour guide explained how they grow rice on Bali. They typically practice a wet method, where the rice seedlings are transplanted into flooded fields, one by one. 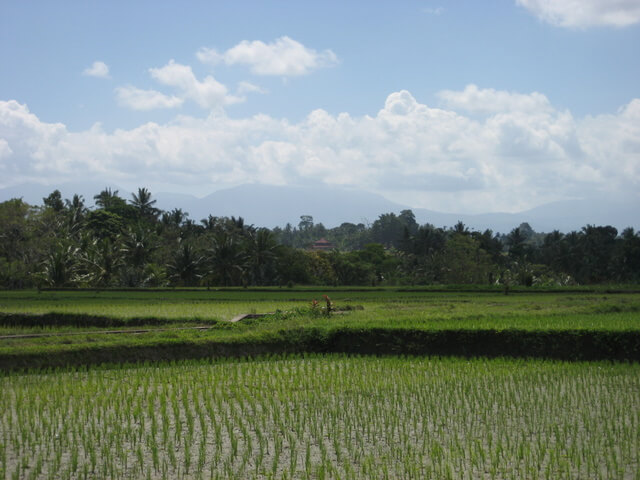 After the rice has been harvested, the stalks are often burned in the fields, and so parts of the island can be have localized air pollution and a strong smoky aroma. Burning the stalks greatly accelerates the decomposition process, returning nutrients to the fields.  Another way that fertility is provided to rice fields is through flocks of ducks, which are set into the fields after harvest to dig for bugs, worms, and other edible things. This reduces pests, loosens the soil, and, of course, the ducks leave their droppings in the field, providing more fertilizer. 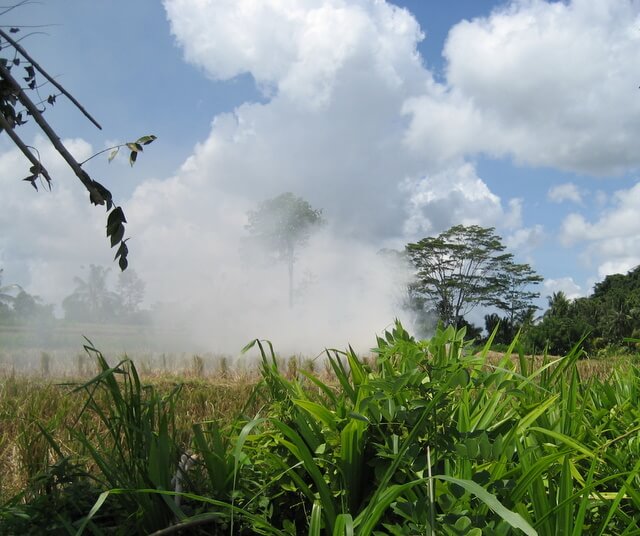 The tour ended with a home-cooked Balinese meal at the home of the leader of the Banyan Tree company, cooked by his wife and family. The setting was peaceful — on a raised patio in the family’s garden — and the food was interesting and tasty — satay, tempe, various vegetable dishes, unusual rice-based desserts, and strong coffee.

Two final photos. First, a shot of one of the rice terraces that we passed.  Although it’s not as spectacular as the terraces shown in the tour guides (or marked on the Periplus Bali map), we also weren’t being bothered by people shoving merchandise in our face as we gazed at the engineering and agricultural accomplishment. (On the previous day we visited the terrace marked on the Periplus map and were swarmed by people selling postcards, batik, wooden carvings, T-shirts, and many other things.)

Second, a shot of a temple (or perhaps it was a family compound) decorated for a wedding. The Balinese calendar indicated that it was an auspicious day for weddings, so there were plenty of these decorations on the island. 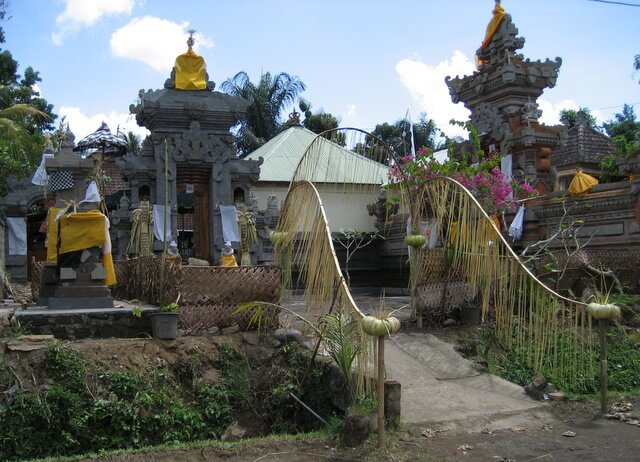 There are apparently a few bicycle tour companies on Bali, but I don’t know anything about them. What I do know is that the Banyan Tree tour was well organized, staffed by exceedingly helpful people (some of the riders had trouble with the few steep hills on the route, and a staff person always stayed behind to help out and offer encouragement), and follows a mostly downhill and quiet route. It’s a great way to see the inside of Bali, far from the tourist shops. Highly recommended.