My blog has been dark for a little while because I was on a trip to Tokyo, Japan. I have quite a few posts planned over the next few weeks, including surviving as a vegetarian tourist in Japan, tempura at Ten-ichi, and curry rice. In the meantime, here are some images and words from my trip to whet your appetites.

Vending machines are everywhere, and have hot and cold drinks (and even canned soup). I am a big fan of the Coffee Boss character. Although one commentator thinks he looks like Stalin, I’m reminded of Fred MacMurray, especially his ethically-challenged character in The Apartment (one of Jack Lemmon’s best films). Some of the names and logos also entertain me: “Wild Drip”, “Aroma Black”, “Velvet Touch.” The taste of the canned coffee, however, is not as entertaining, as all of the wonderful volatile components dissipated during the manufacturing process, and the coffee is never quite hot enough for me. The canned milk tea, on the other hand, is decent.

The basement of most large department stores is a wonderland of food. Called the “depa-chika” in Japanese (= department store basement). The depa-chika is a feast for your eyes, nose and tastebuds: a seemingly endless matrix of small stands with different specialties. For example, stands specializing in green tea, pickles, sushi, yakitori, French pastries, or traditional Japanese gift foods (lots of mochi, lots of sweet bean paste). The packaging of the gift foods is quite beautiful, especially now just before cherry blossom time (hanami)—pictures of cherry blossoms were virtually everywhere. 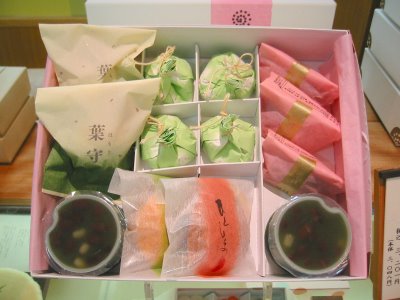 Some small packages with unknown contents 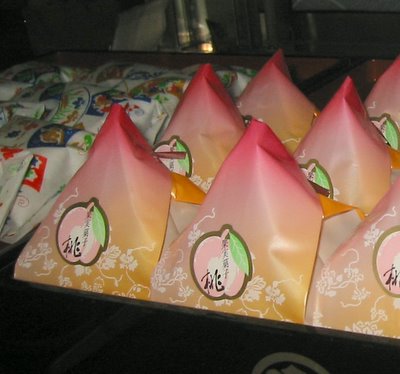 The pickle (tsukemono) stand (at the Shinjuku Isetan, I think) 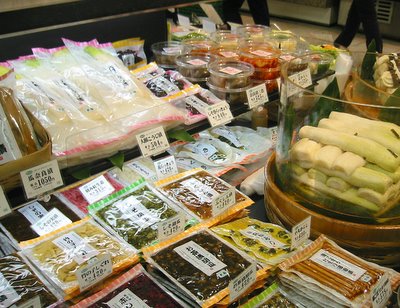 Plastic food is everywhere, and sometimes is quite life-like. The photo below is from a curry shop in one of the train stations (Shinjuku, I think, but I’m always so disoriented in the bigger stations that I may be wrong). “Curry rice” is an immensely popular convenience food in Japan, with the average person eating curry rice a few times a month. Yokohama even has a museum devoted to the dish! 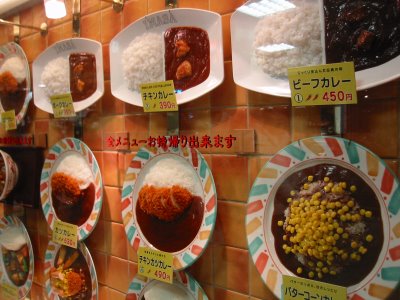 I don’t know if wasabi is available year round, but it was in the markets during my visit. The photo below shows some of the roots, which were priced between 500 yen and 1000 yen per piece. In general, they are about 1″ in diameter and 6″ long. Unfortunately, on this trip I did not have the pleasure of sampling it. 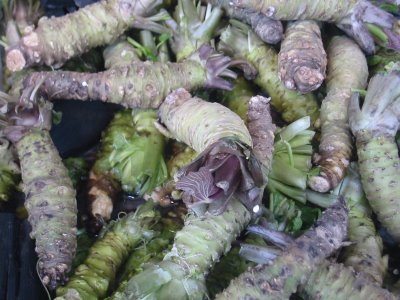 That’s it for the appetizer…check back for my Tokyo posts. They will be served in small portions like a meal at a shojin ryori.