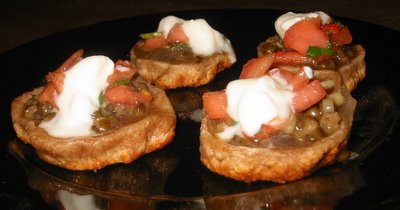 Mexican cuisine has a group of foods called antojitos (“little whims”), that includes popular items such as quesadillas, taquitos, and tostadas. One of my favorites is the sope: a small disk (5-8 cm diameter, 3 mm thick) of corn-based dough (masa) with a rim around the outside to contain a spoonful of salsa and a sprinkling of cheese.

Since I was in a Mexican-Indian fusion mode when I made the urad dal soup, I decided to experiment again and use the sope techniques to make an Indian chaat.

As noted above, the traditional dough for a sope is made with a corn-based dough (masa). Since masa is distinctly Mexican (as far as I know), it wouldn’t be an appropriate pairing with the urad dal. So as a substitute, I made a basic chapati dough with whole-wheat flour and water (alternative ideas to this are encouraged. Potato? Channa dal flour?). To make the boat, I first shaped disks of the rested chapati dough to about 1/4″ thick by 2″ diameter (0.6 cm by 5 cm). Then I cooked the disks on a medium-hot griddle until both sides were lightly browned (a few minutes per side). I let them cool for a few minutes, then carefully pinched a border around each disk of hot dough to make a little shell that will hold the goodies. I heated some oil in a pan and lightly fried the bottom of the boat. To finish the dish, I filled the boats with the urad dal and topped them with the chutney and yogurt. The result was quite a tasty little snack. The crispy base of the disk was a pleasant contrast to the soft toppings, but the inside of the disk was a little bit too gooey for me. A problem that could be solved through many approaches: adding leavening to the dough, attempting a paratha-type dough, switching to a potato base, to name a few. 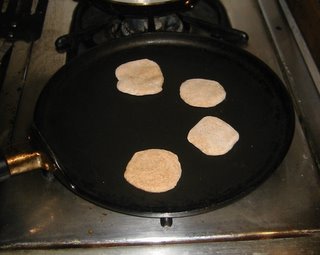 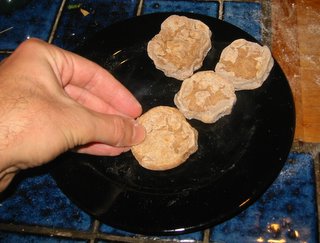 Panfrying the disks just before serving 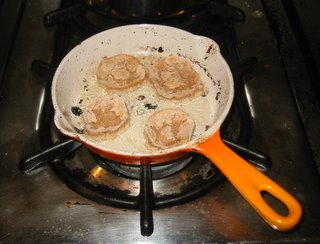 Notes
The first photo in this post has a tenuous similarity to chaat that I have eaten in the past, namely pani puri and one with potato patties. And since the concept of putting a topping on a disk of bread is not novel, I wonder if the world of chaat already has a boat-like item.

I’m fortunate to live near a Latin American grocery store that sells fresh masa dough on weekends (Mi Tierra at 2096 San Pablo Ave in Berkeley), and one of these weekends I plan to have a “masa fest”, in which I finally figure out how to make good corn tortillas. I will make sopes with tomatillo salsa and aged cheese and record the process for the blog. Other East Bay/SF locations to buy fresh masa include the Primavera stand at the Saturday Berkeley Farmers’ Market and Las Palmas on 24th Street in San Francisco.