Inspired by citrus, I made an ethereal dessert: orange sabayon with satsuma mandarin sections and sliced almonds. It was light, flavorful, and a beautiful contrast to the sharpness of the mandarins.

Sabayon is a relative of the classic Italian zabaglione, which is a light, foamy dessert made with sweet Marsala wine, egg yolks, and sugar. It can be eaten on its own, used as a sauce, or frozen to become a semifreddo. The word “zabaglione” is derived from the Neapolitan dialect word “zapillare”, which means to foam (ref: Larousse Gastronomique).

Winter is citrus time and I had some delicious satsuma mandarin oranges and also some Cointreau in my pantry. Cointreau is a liqueur made from a blend of peels from bitter and sweet oranges. It was created in 1849 by confectioner Adolphe Cointreau and his brother in Angers, France. With these ingredients on hand, I slightly adapted on a recipe from Epicurious, with satsuma mandarin orange replacing the blood orange.

The first step was to combine the starting ingredients: two egg yolks, some sugar, orange juice, orange liqueur, and orange zest. Next, I whisked them together. The volume at this point was less than 1/2 cup, and climbed barely two centimeters up the side of the bowl. 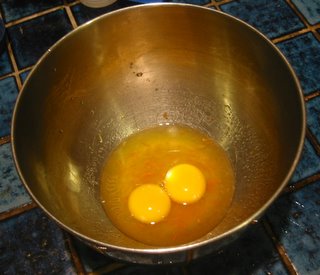 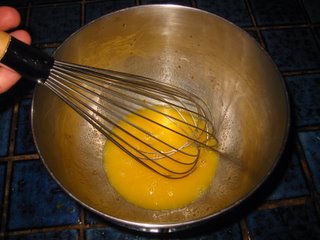 After combining the ingredients, I put the bowl over a pan of simmering water and started cooking it, all the while whisking vigorously.

Cooking the sabayon over simmering water 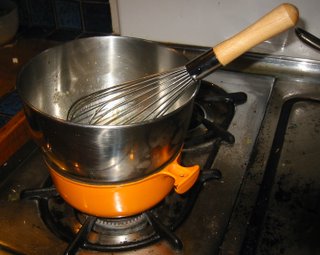 Over the period of a few minutes, a marvelous transformation occurred in the workbowl: a light foam formed and the mixture increased in volume by 4 or 5 times. I whisked until the foam reached 140 degrees F, then whisked for a few more minutes until it thickened so that the whisk left trails in the foam. At that time, I took it off the heat, let it sit for a few minutes, then spooned it over orange sections and topped with sliced toasted almonds. 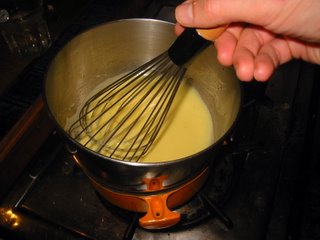 So how did the liquid in the second photo turn into the light foam in the last photo? The secret is to defeat surface tension. A foam is a collection of gas bubbles spread through a liquid or solid. Liquid-based foams like zabaglione are mostly water, and depend on the substances dissolved in the water to stabilize the foam. Pure water, as we all know, makes lousy bubbles. The reason for this is that the surface tension in the water and gravity pull apart any structure that you try to build. But when something like egg yolks and sugar are dissolved in—or emulsified with—the water, a temporarily stable matrix can be created. Egg whites, of course, make outstanding foams (as illustrated recently in IMBB #20, Has My Blog Fallen), primarily because of their albumen proteins. Egg yolks have significant fat content which interferes with foam formation. Nonetheless, with proper technique a light and foamy dessert can be whisked up. (for a few pages of the science behind egg foams, consult Harold McGee’s comprehensive On Food and Cooking, or visit the Exploratorium‘s Egg Science page)