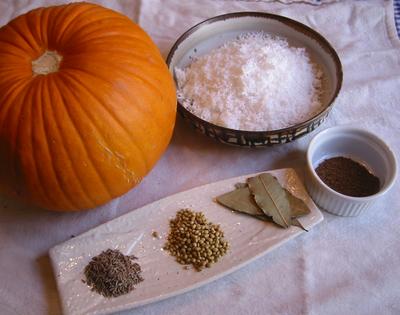 I’m not sure why the first book I pulled from my cookbook shelf was Bengali Cooking: Seasons and Festivals by Chitrita Banerji. I was looking for ideas for the second half of a pumpkin for Elise’s Great Pumpkin Carve Up Cook Off (the first half was used in pumpkin baked with onions, tomato and tomatillo-chipotle salsa). The book has very few recipes, with the bulk of it being a detailed, impressionistic description of how culture, weather and geography have influenced the cuisine of the Bengal region. It includes only about 20 recipes, and fortunately for this project, one of them features pumpkin.

Banerji writes that the pumpkin is such a common vegetable during the rainy season that many Bengalis consider it an indigenous vegetable. Although some gourds are endemic to South Asia, this is not the case for the pumpkin (member of the Cucurbitaceae family), which is indigenous to the Americas. It was probably introduced to Bengal by Portuguese traders in the 17th century. Other gourds, however, have been in India for so long that “…many carry Sanskrit names of considerable antiquity, which is probably explained, not necessarily by human intervention, but by the ability of these dried gourds to float across the seas from continent to continent without losing seed viability.” [quote from A Historical Dictionary of Indian Food, by K.T. Achaya]

If you have a food processor to grate the pumpkin and a good source for high quality coconut (or the patience to peel and grate it yourself), the recipe is quite easy to prepare. As food from the Indian subcontinent goes, this dish is mild and subtle. It goes nicely with plain rice and something with a lot more spice and heat.

Pumpkin and Coconut with Spices

Adapted from Bengali Cooking: Seasons and Festivals by Chitrita Banerji