Winter squash are legendary for their versatility and hardiness.  Ideal for soups, roasting, stews (Japanese or French to give two examples), and even some baked goods, they also are relatively resistant to damage and have long shelf lives — no padded carriers or stress when bringing home a few from the market.

The sweetness and solidity of winter squash makes it a great partner for the sharp and tangy flavors found in Mexican cooking.  One delicious way to make this pairing is by simmering squash in tomatillo, tomato and chipotle chile sauce for a tasty vegetarian side dish, burrito filling, or taco filling.

The recipe starts with a classic Mexican salsa technique:  pan-roasting tomatillos (like in my basic roasted tomatillo salsa).  As the heat of the oven chars and cooks the vegetables, new and interesting flavors are created. The charred vegetables and their juices go into a blender with smoky chipotle chile puree and pan-roasted garlic to create a sauce with tanginess, sharpness and heat1.

Next, onions are cooked in a sauce pan to build more flavors. Once they are soft, the sauce and squash are added to the pan.  Everything simmers together until the squash is ready.  Top with toasted pumpkin seeds, cilantro, and/or cheese, and you have a delicious side dish or filling for tacos or burritos. 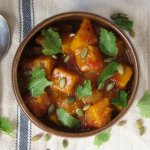 Sweet squash are simmered in a rich and smoky sauce made from tomatillos and tomatoes. A hearty and tasty side dish or filling for tacos or burritos.
Course Side Dish
Cuisine Mexican
Prep Time 30 minutes
Cook Time 30 minutes
Total Time 1 hour
Servings 4

Vegetables (all amounts after peeling and seeding)

Prepare and cook the vegetables

Tomatillos can be found in many grocery stores and nearly all Latin markets. Unlike tomatoes, they are pretty good in the off-season.

Chiles can be complicated: There are two ways to use chipotle chiles in this recipe, dry or canned. Either way, you end up with a puree of the chile.

For canned chiles, open a can of chipotle chiles in adobo sauce (available at Latin American groceries and even some upscale grocery stores). Pour the whole thing into a blender jar. Blend until smooth. Scoop out the puree onto plastic wrap in 1 tbsp blobs or as a big log. Store in the freezer. When you need some chipotle puree, simply slice off what you need. (This is my preferred method -- it's so easy.) 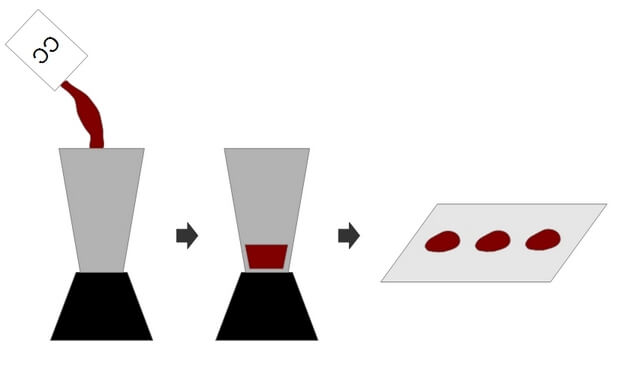 For dried chiles, remove the stem and seeds (be sure to wash your hands well after touching the chiles), then soak them in hot water for about 30 minutes. Drain and put the chiles in the blender jar. Discard the soaking liquid.

Culinary Historical Note
Squash have been eaten in the Americas for thousands of years.  Squash seeds dating to 9000 B.C. have been found in caves in the Americas, and it’s possible that squash might have been the first vegetable cultivated by humans in the Americas.2.  Over the millennia we have figured out countless ways to cook the plant. In Mexico you’ll find preparations that use nearly the entire plant: flesh, seeds, blossoms, and even the tender shoots. The flesh is used in soups, stews, as a taco filling, and even as a dessert 3. The seeds have high nutritive value and wide range of uses including as a thickening agent for sauces, such as the complex and elegant sauce called pipian or mole verde4. The blossoms are used in quesadillas and soups.