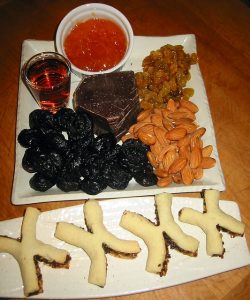 I don’t have much experience cooking or baking with prunes. In fact, it’s hard to remember the last time I bought prunes. But Prune Blogging Thursday was too hard to ignore, especially since it will only happen one time.

My simple idea was to use them instead of figs in filling for cookies. I used Nick Maglieri’s “X cookies” contribution to Baking with Julia (which was a gift from an “ex”, to add to the X-theme). The revised filling consisted of prunes (4 parts), apricot jam (1 part), golden raisins (1 part), dark chocolate (1 part), toasted almonds (2 parts), brandy (1 part), and cinnamon (about 1 t. per cup of prunes).

I combined the items for the filling in the bowl of a food processor and ground it to a rough paste. The wrapper for the filling was a rich, slightly sweet dough (called “pasta frolla”) that contained lots of butter and eggs (and was also made in the food processor, thus simplifying clean up a little). To make the X shape, I formed a piece of dough into a long rectangle. Next, I rolled a piece of filling into a cylinder with the same length as the rectangle, placed on the rectangle, and sealed in the dough. I cut the filled cylinder into about five pieces, then sliced along part of the central axis and bent the cut sections to make an X shape. It is a complicated process, and I recommend that readers consult the original text — which has some useful photos.

(Update, 2/19/17: Nick Maglieri’s recipe inspired me to bring these flavors into a far simpler application:  a basic fig bar.)