A Man’s Pie from Sun-Maid Raisins

One of my finds while bouncing through the Flickr Commons was this 1920 advertisement for “A Man’s Pie.” 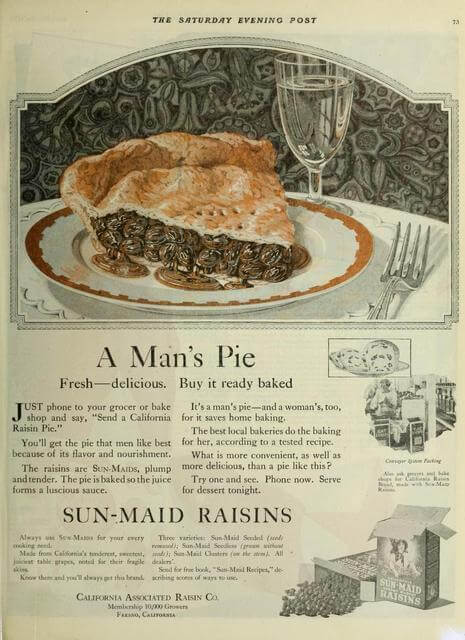 A “Man’s Pie,” it turns out, is a California raisin pie.  Here’s some of the copy:

Just phone to your grocer or bake shop and say, “Send a California Raisin Pie.”

You’ll get the pie that men like best because of its flavor and nourishment.

I don’t recall ever eating a raisin pie, but it sounds promising — I can imagine some spices, macerating the raisins in brandy or rum, and intense flavor. I made a quick run-through of my baking cookbooks and found only one recipe for raisin pie (in Professional Baking by Wayne Gisslen). Surprisingly, the Pie and Pastry Bible by Rose Levy Beranbaum doesn’t have a raisin pie (but does have macerated raisins for another dessert).

Image credit
A Man’s Pie, advertisement from the California Associated Raisin Co. in the November 20, 1920 Saturday Evening Post, from the Internet Archive, no known copyright restrictions.