A Sampling of Vintage Kale Salad Recipes from 100+ Years Ago 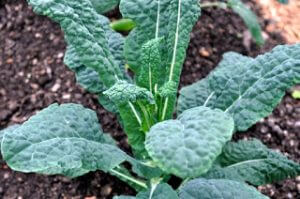 Kale salad — superfood in a bowl, a nutritional powerhouse, a bold canvas for bold flavors — has been a major trend in recent years. A recent article in Food52 —  A New Genius Salad from the Chef Who Started the Kale Salad Craze — notes that it was introduced to a wide audience in late 2007:

But back in October 2007, Melissa Clark was introducing the concept to many for the first time in The New York Times: “If a chef dares to offer something as unappealing as, say, a raw kale salad, chances are it’s fantastic,” she wrote in an article titled If It Sounds Bad, It’s Got to Be Good. This article was all about the curious, addictive raw kale salad at Franny’s in Brooklyn (also published in Saveur the same month), which seems to mark the launch point for kale salad to catapult into the food trend hall of fame.

(Update, 10/24/17:  A piece by Mari Uyehara at Taste Cooking recounts the history of kale salad on its tenth anniversary.)

After reading the Food52 article, I wondered if there were earlier versions of kale salad, and what they looked like.  To get the long view, I headed over to one of my favorite quick-research tools — Google Books — to look for much older versions of “kale salad.”  I was not disappointed, finding a handful of recipes from 100 years ago and more. And I also found some old books that could be at home on bookstore shelves today (after a lot of updated design and new photographs).


Kale “…has now become very popular in this country”

That line appears in an article by C.G. Moore in The Hotel Monthly trade magazine in 1900, yet another instance of what is old is new again.  where the author notes that kale “…has now become very popular in this country.”  Unlike most of today’s kale salads — where the vegetable is not cooked, but instead might be massaged with salt to soften the leaves — this recipe used well-cooked leaves:

KALE SALAD Select the inside leaves of young kale remove the roots and carefully wash the leaves. Steep them in salt water two or three hours. Then plunge into boiling water and cook until done. Drain, press dry, and cut in pieces about two inches long. Put into a salad bowl that has been rubbed with a clove of garlic. Season and mix with French salad dressing. Serve in same bowl. Garnish with quarters of hard boiled eggs.

Although Moore doesn’t give a recipe for “French salad dressing,” I am confident that he means a simple vinaigrette of oil and acid, not the neon orange bottled dressing at the supermarket and salad bar (which was invented in the 1950s?).   This looks good and I have probably made something close to this in the past, i.e., a pile of cooked kale with some oil and vinegar. But no hard boiled eggs — that is not a food I ever cook at home (so much sulfur…).

So writes the dramatically named Maximillian DeLoup, in his 1899 salad book, which he called “the most complete, original and useful collection of Salad Recipes ever brought together.”  At only 140 pages, it seems unlikely, but it was 1899 when there probably weren’t many books focused on salad.

DeLoup launches “complete, original and useful collection” with a plea that sounds like something you might find today:

America the Land of Salads.

Too many Americans still follow the questionable fashion of thinking that foreign nations are ahead of us in salad making. France for a long time led in this as in many other delicate arts, but today she does not possess or cannot import from distant countries, the great variety of delicious fruits and vegetables obtainable in so many sections of our own favored land. England is still barbaric in much of her salad serving and eating, and while the Teutonic salads are powerful, American palates cannot always relish them. Other nations are mostly imitative, as we have been in the past, while we are fast learning that originality and adaptation have given us the best the world affords.

Times change and we change with them. New things will doubtless continue to come into use, and in a measure, supersede the old, but when we reflect that fifty years ago tomatoes were scarce and called “Love Apples,” being principally cultivated for ornament, we need not be surprised at the introduction and use of any of our native vegetable productions for salad materials.

We still eat too few green salads: our climate varying with the changing seasons, demands an almost constant change of food. While the more highly seasoned compounds may be acceptable during the cold months, most of us feel a repugnance for them when hot weather comes, and long for something delicate and appetizing, yet cold.

As we cultivate a taste for wholesome green foods and learn to prefer them to heavy bulky materials, the supply will come in response to the demand, and the glory of the past that was once over other lands will come to us and successfully defy all rivals.

And here’s the recipe, one that might be found today in the salad section of a menu, as it has raw greens and protein (just add “house-made” in front of head cheese):

Borecole Salad. This vegetable, better known under the name of Kale, is much used by foreigners who make a salad of it by selecting the young tender leaves and mix with about one-third the quantity of young sorrel leaves, chives chopped or any other herb liked. Serve with French dressing [a basic vinaigrette]. This salad is nice with head cheese, cold ham or hard boiled eggs.

self-published in 1909, Drews’ Unfired Foods… is an early books that espouses a raw food diet. Although his focus is unfired foods, Drews’ scorn for cooked food is often fiery (“Every attempt to improve natural food by artificial means results in failure [natural = raw, unfermented]”, “Unnatural Food…develops An Unsound Mind, makes A Foul Character, results in a Ruined Reputation…”) and his passion for his raw food is immense (and certainly overenthusiastic).

The book is positively modern, another example of the idea that nothing is ever new — with modern typesetting and some artistic photos, this book could fit in perfectly in the raw foods cooking section today.  The book also seems notable for the inclusion of detailed nutritional tables for foods — nutritional science was at its infancy in the early 20th century.  The kale salad recipe, however, looks absolutely bleak:

KALE SALAD
1 oz Curled Kale or Chinese Cabbage chopped and
1 oz Peanuts, Pignolias or Almonds flaked. Mix these and serve.
Learn to like this salad for the sake of your blood.

It is not clear whether a salad like this is allowed to be dressed — perhaps its plainness is part of the therapy.  The book has a dozen or so dressings, as well as guidance about how to use each dressing. 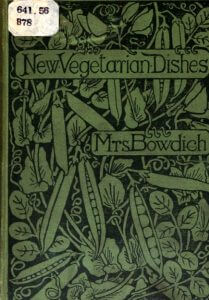 This quote is from the preface to the book, written by the treasurer of the London Vegetarian Society. I couldn’t find anything fun or inspirational in the book’s text because Mrs. Bowdich is all business: immediately after the preface, it’s one recipe after another with no headnotes or embellishment.

This book was published in 1892 (and went through at least twelve editions (!)), a true vegetarian classic. After perusing the book, it looks to me like it could have been printed in the late 1960s by a Back to the Land collective or a food co-op — it has lots of beans, hearty sauces, and loafs/balls/fritters that make me think of that era.

Mrs. Bowdich’s kale salad is called “Sea Kale Salad,” and so I wondered if this is calling for a different ingredient — a clue is in the other kale dishes, which are “Green Kale ____.” So I took a look on Wikipedia and found that there is a cardoon-like vegetable that goes by the name “sea kale,” Crambe maritima, and so perhaps Mrs. Bowdich is using that vegetable.  Sea kale appears to be relatively small, especially when grown as a blanched vegetable, and that could explain the “6 or 8 heads,” a quantity of green kale that would overwhelm most home kitchens.

No. 193. — Sea Kale Salad
6 or 8 heads of kale
Sauce No. 176
Boil the kale until tender in salted water. When quite done, strain and stand on one side to get cold. Cut into pieces about one inch long, place in a dish or bowl, pour over half the sauce, and the remainder just before sending to table.

No. 176. — Salad Sauce
The yolks of two eggs
A large pinch of salt
The same of pepper
1/2 gill of vinegar [a gill is 142 mL]
1 gill of milk
Drop the yolks into a small enameled stewpan, add the pepper and salt, and stir well with a wooden spoon; pour in the milk, which should be just at boiling point, then stir briskly over a gentle heat for about ten minutes, or until the sauce thickens, but it must on no account be allowed to boil, or it will curdle. When sufficiently thick, remove from the fire, stir in the vinegar, and stand on one side to get thoroughly cold. It is then ready for use.

I actually tried this recipe and it was fairly unpleasant.  The reason might be my error:  1) I used normal kale, and 2) as I re-typed the recipe, I noticed that I had a typo on the vinegar, so I probably made my “salad sauce” with double the vinegar (that would explain why it was so sour!).

I could go on like this for days, but I think this is enough for now.  The approach to kale salad in these old examples is somewhat similar to today’s kale salads:  mix tender kale leaves with dressing.  Missing steps, however, are the ‘kale massage’ — where the leaves are massaged to soften them, sometimes with salt — and the sometimes extravagant embellishment with seeds, fruit, and other items.

Not surprisingly, if we look back into historic cookbooks, we’ll find many of today’s trends in slightly different form. Sometimes this is because certain attitudes are have persisted over centuries (avoiding harm to animals). Other times the old practices were out of necessity — eating hardy vegetables like kale that could survive frosts or be stored over the winter, or fermenting vegetables to preserve them — but have gained popularity now for nutritional or culinary reasons.

An Ngram on “kale salad” from 1970 to 2008 will show the usage rates of “kale salad” in books in the Google Books library.

Google Trends report for “kale salad” will show the rate at which people used Google to search for a certain term.

The 1900 Hotel Monthly with the C.G. Moore recipe has this note in its “Notes and Personals” section:

Pryor L. Markel son of J.E. Markel of the Millard, Omaha, and Miss Nellie Kitchen daughter of Ralph Kitchen of the Paxton at Omaha, were married August 14 at Kansas City. The Millard and the Paxton have been the leading hotels of Omaha for many years, always competing for the best trade and they will continue to do so in the spirit of friendly rivalry begotten of this union of the two families.

References
These four sources are featured above:

These two sources are not featured because their kale salad is quite like Maximillian DeLoup’s: