Tlacoyos – An Antojito for Football Season? 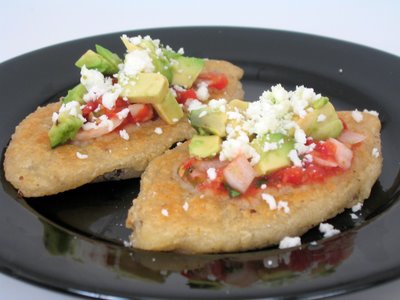 Just in time for football season, a (American) football-shaped snack: the tlacoyo. Tlacoyos are another in the family of antojitos (“little whims”), the delicious and diverse masa-based items from Mexico. Diana Kennedy, in From My Mexican Kitchen, writes

Tlacoyo is the common name, a variation of the Nahuatl words tlatlaoyo and claclaoyo, given to an antojito typical of central Mexico: corn masa formed into a flattish elongated oval and stuffed often with ricotta, requeson [a fresh cheese similar to ricotta], or a paste of fava beans. They vary enormously in size from very large—about 5 or 6 inches, in Santiago Tianguistenco, Estado de Mexico—to medium—about 4 inches in Xochimilco—to very small—about 3 inches in Sierra Norte de Puebla.

The process for tlacoyos is relatively straightforward:

Step-By-Step Instructions
To make the dough, you’ll need corn masa (ideally from fresh masa, but a dough made from reconstituted masa harina might be acceptable. If you have a choice between tortilla and tamale masa, choose tortilla as it has finer texture), beans which have been seasoned and mashed (so that they are easily spreadable), salt, and some soft butter.

Combine the masa, butter, and salt, and knead lightly until the mixture is homogeneous. The proportions I use are roughly 8 ounces masa, 1 T. butter, and 1/2 t. salt. Line your tortilla press with thick plastic (a freezer bag has a good thickness for this). Place a lime-sized piece of dough (diameter of about 2″) on the plastic sheet lining the bottom part of the tortilla press, then place the second piece of plastic on top of the dough. Lower the top of the tortilla press, and gently flatten the dough. Lift the top, rotate the plastic 180 degrees (to encourage evenness). Gently press again, until the dough is about 1/8″ thick (3 mm). Lift the top piece of plastic.

Place a heavy skillet on a burner over medium low heat, and let it preheat while you work on the dough.

Now it is time for the beans. Using a knife or fork, spread a thin layer of beans on the masa circle, leaving space around the beans as shown below. 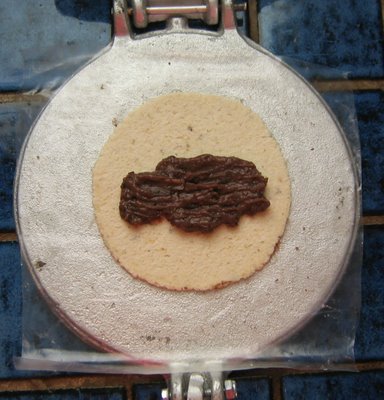 Placing the bean paste before forming

The next step is to wrap the masa around the bean filling. This is the trickiest step, and the one for which I could have used a photography assistant or videographer. Rotate the circle 90 degrees so that the axis of the beans is parallel to your line of vision (i.e., the above photo rotated 90 degrees). Take hold of the plastic sheet on the right and left of the dough, then lift it up to bring the edges of the dough together in the middle. Lightly press the dough together so that it sticks, then carefully peel back the plastic. You’ll end up with something like the photo below. Push the dough together to seal the package. Sometimes the bean puree spills out, but that is not a problem–the escaped puree turns into a crust of sorts as the beans cook. 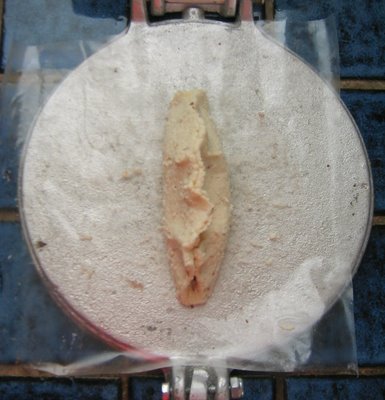 After rotating 90 degrees, pulling up the sides, and pinching the seam

Next, lightly press the newly-formed dough joint to make a fairly flat surface. 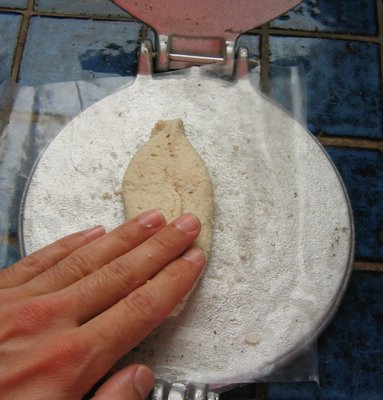 The tlacoyos are baked in two stages: first on a dry skillet, then in a shallow layer of oil. The first stage is over medium-low heat, and takes about 10 minutes overall. Flip the tlacoyos now and then to allow each side to become light brown. Remove to a mesh grill to cool. Note that after griddle baking, the pieces can be put aside for a while. 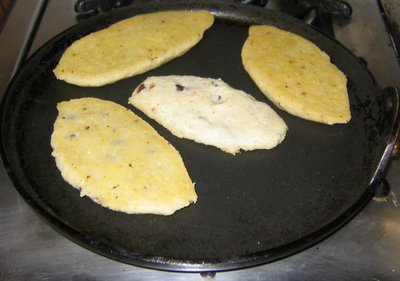 First cooking – on a dry griddle over medium-low heat

Just before you are ready to eat (this food is best eaten within minutes of being finished), place a heavy skillet or griddle over medium heat, pour in some oil, and let it get hot. Cook the tlacoyos on each side until crispy. Drain on a paper towel, then top with your favorite salsa (e.g., roasted tomatillo, or one using dried chiles), pieces of avocado, crumbled queso anejo (or cotija), chopped cilantro, whatever.

Postscript
If you love masa-based foods like corn tortillas, be sure to read Tom Philpott’s Tortilla Spat over at Grist Magazine. It tells the tragic tale of how big industrial interests, self-dealing and cronyism in Mexico have switched the masa supply from one based on whole dried corn to dried corn flour, with significant degradation in flavor, aroma and texture.

Indexed under Appetizers and Snacks, Mexico