Waiter, You Forgot the Fly Garnish for My Soup! – Insects as Food

At the office lunch table a long while ago, the subject of eating insects came up. One of my colleagues became nauseous just thinking about eating an insect, and I didn’t feel too good either. Although I am a vegetarian, I have no ethical problem eating insects—they are below my “line” (i.e., “you gotta draw the line somewhere”), but something deep within me is telling me that they are not something I should be eating. From a hard-headed, non-emotional point of view, though, a fear of insect eating doesn’t make a lot of sense. In much of the world throughout much of history, insects have been perfectly suitable food, and for good reason: they are nutritious, easy to find, and tasty.

One of the most popular commentaries about insects as food is anthropologist Marvin Harris’ book The Sacred Cow and the Abominable Pig, which devotes a chapter to insect eating (entitled “Small Things”). Harris proposes a number of reasons for taboos about or resistance to insect eating (Harris also discusses cannibalism, the Jewish and Muslim ban on pork, why pets aren’t meat, and more). In other sources (like Man Eating Bugs, by Peter Menzel and Faith D’Aluisio), I have found additional possibilities. And, of course, there is my own history with insects.

Harris writes “The reason we don’t eat them is not that they are dirty and loathsome; rather, they are dirty and loathsome because we don’t eat them.” (note that “we” is referring to Europeans and Americans of European descent) Harris claims that the European rejection of insects as food comes from a time long before indoor plumbing or before anyone made the connection between germs and disease. In those days, a locust living in a meadow or a spider living in the forest was probably a lot cleaner than meat from the farmhouse or local butcher.

Another cleanliness factor is that when you eat an insect, you generally eat the entire digestive system, a part of the body that is potentially ripe with pathogens and certainly firmly in taboo-land. Proper cooking of the creature will kill the pathogens within, but it might be hard to get my brain to remember that.

For most insects, you eat the whole thing, and unless it is covered with a thick layer of batter or in a cake, it is clearly identifiable: it’s a bug. Most other meats are just a blob on a plate or a bun, several degrees removed from a living creature. Clear exceptions to this, however, are whole fish, shrimp, oysters, and lobsters (especially ones picked from a tank at a restaurant), which are staples of high-end cuisine. The many exceptions lead me to believe that identifiability is not as important as personal and cultural views. 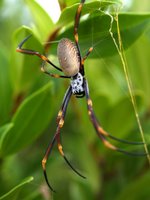 I read somewhere (perhaps it was in Man Eating Bugs) that a person’s food habits are primarily developed in the first few years of life. I grew up in a suburb in Michigan, and no one I know ate insects on purpose. I certainly didn’t even consider it–it repulsed me then as it does now. The question was probably moot, in any case, as there were no swarms of locusts, huge termite mounds, honeypot ants, or giant spiders, and so finding a snack or meal was not easy. But then again, if you would have asked me when I was 12 years old if I would eat seaweed, or a smelly paste of fermented soybeans called “miso”, I’m sure I would have said “No way!” So change is possible.

It would be interesting to see how insect-eating habits transfer outside of the homeland and to the next generation. For example, grasshoppers (chapulines) are a popular snack food in Oaxaca, Mexico. What do U.S.-raised children of Los Angeles immigrants from Oaxaca think about eating grasshoppers? We can guess what the teenagers think—if the parent likes it, it must be horrible—but how about the pre-teens and young adults? Are chapulines even readily available in LA? And if so, I hope they are collected from areas which are not sprayed with pesticides because insects are concentrators of toxins (i.e., the chemicals accumulate in their bodies over time, leading to high levels).

Or cultural attitudes about insects?

For me personally, the insects that I grew up with were always an enemy: swarms of mosquitos, biting horseflies, yellow jacket wasps, “no-see-ums,” and other tiny pests (and this was in the days before Lyme disease, West Nile virus, and in a region without fire ants or killer bees). You’d think that would make me happy to eat them, but it didn’t. I just wanted to smack them dead.

Harris offers these comments on this subject:

…the peculiar loathing which accompanies the European and American rejection of insects as food. The interesting fact is that most Westerners not only refrain from insectivory but the mere thought of eating a grub or a termite—not to mention a roach!—makes many people sick to their stomachs. And to touch and insect–or worse, to have one crawl on you–it itself a disgusting event. Insects, in other words, are to Americans and Europeans as pigs are to Moslems and Jews. They are pariah species. The standard claim that insects are dirty and disgusting makes no more sense than the standard claim of Jews and Moslems that pigs are dirty and disgusting. … p. 173

A species will be apotheosized or abominated depending on its residual utility or harmfulness. A Hindu cow not eaten provides oxen, milk, and dung. It is it apotheosized. A horse not eaten wins battles and plows fields. It is a noble creature. A pig not eaten is useless—it neither plows fields, gives milk, nor wins wars. Therefore it is abominated. Insects not eaten are worse than pigs not eaten. They not only devour crops in the field, they eat the food right off your plate, bite, sting, make you itch, and suck your blood. If you don’t eat them, they’ll eat you. They’re all harm and nothing good. (pp. 173-174)

…Since we don’t eat them we are free to identify them with the quintessential evil–enemies who attack us from within–and to make of them icons of dirt, fear, and loathing. (p. 174)

Are insects just too hard to collect?

Harris says that the lack of huge termite mounds, swarms of locusts, or enormous waterbugs, is one reason bugs are not popular in the U.S. and Europe. That is, collecting insects in such an environment would require too much effort relative to hunting a deer or raising pigs. However, some researchers have found that it is easy to gather a lot of calories quickly:

A Change of Attitude?

Did all of this research change my opinions about insects as food? Yes, a little. If I am ever lucky enough to visit Oaxaca, I’ll think seriously about trying chapulines (with hot sauce and a squeeze of lime). Or if I visit the Issan region of Thailand, or the markets in Seoul, South Korea (where I saw some kind of worm for sale in large woks), I will consider trying the insects at the markets.

A final note on taboos takes us to Greenland. A review of Jarad Diamond’s Collapse tells of the failure of Norse colonies on Greenland because the colonists wouldn’t eat fish:

In Diamond’s view, societies that refuse to make this choice [examining their core values and abandoning obsolete ones], but rather cling stubbornly to all their values even in the light of changing circumstances, are unlikely to survive and, indeed, risk catastrophe. His favorite example is the Norse population of Greenland. Their hubristic attachment to their identity as European Christians prevented them from achieving peaceful and productive relations with the Greenland Inuit, whom they looked down on — even though the Inuit were far more successful as colonizers of that harsh environment, and continued to successfully inhabit Greenland after the Norse settlement had died out.

At the same time, the Norse settlers’ unwillingness to alter their traditional eating habits led to an overdependence on inappropriate food sources, particularly cattle, and prevented them, astonishingly, from taking advantage of the most readily available source of protein in Greenland: fish.

Will the West’s abomination of insects have similar impacts in the future? Or will insects become part of the diet as population grows and agricultural lands are degraded by industrial agriculture?