While visiting a nature preserve in California between Half Moon Bay and Pescadero State Beach, I learned something very interesting about the origin of strawberries. Thanks to an interpretive sign at the preserve, I learned that the beach strawberry, Fragaria chiloensis, is one of the ancestors of today’s domestic strawberries. The plant is native to most of the west coast of North and South America, and was named after Chiloe Island in Southern Chile (700 mi south of Santiago). It grows on coastal dunes and grasslands, which can be harsh on the Pacific Coast, with such stresses as unrelenting winds, salt spray, and 8-9 months without rain. In the spring, it develops white five-petaled flowers and small red fruit. 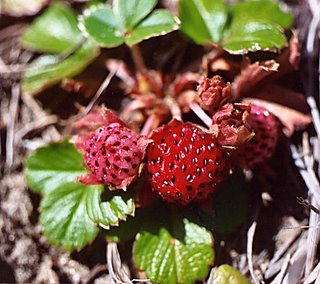 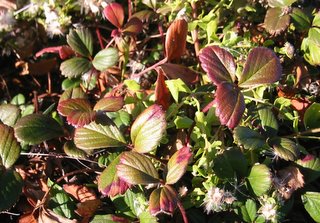 The story of how the beach strawberry entered the world of commercial agriculture is told in a direct way in the Oxford Companion to Food, and more indirectly and personally by Raymond Sokolov in his Why We Eat What We Eat. My comments below draw from both sources.

The strawberry named itself: its Latin name is “Fragaria”, for its fragrance. There are four main species of wild strawberries:

Also in the 17th century, a few beach strawberry plants (F. chiloensis) were imported into France from Chile by a member of the French Navy named Amédée François Frézier. The specimens were given to the great botanist Bernard de Jussieu at the King’s Garden in Paris. Jussieu propagated the plant and gave specimens to botanists around Europe. They tinkered and made a variety of fruit sizes (including some as large as an apple), but none had sufficiently attractive flavor, aroma, or hardiness to become commercial plants.

Another French botanist, Antoine Nicholas Duchesne, was working on the strawberry, and planted a Virginia strawberry near a beach strawberry in his experimental plots. The two New World plants cross pollinated, and produced a hardy plant with excellent fruit. It was named F. ananassa, because of a pineapple fragrance. These hybrids were sent to various botanists in Europe, with the first commercially successful plants produced in England in 1819 and called “Keen’s seedlings.” Some of these were brought to the United States and were used to start a commercial strawberry industry. In more recent times, University of California agriculture departments have worked hard to create new varieties.

It almost seems like a fairy tale. Scrawny and unruly plants from two opposite coasts of newly colonized continents accidentally meet in Paris, and their descendents go on to great success as a famous, delicious and versatile fruit.