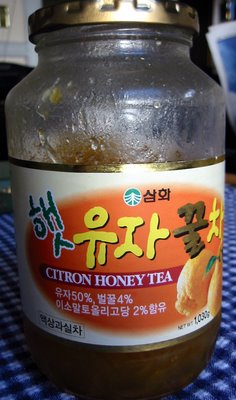 I first discovered Yuzu (Citrus aurantium), when my brother brought me a jar of yuzu marmalade from Japan. Known as yuzu in Japanese and yuja in Korean, this round Asian citrus has a distinctive flavor that is somewhere between lemon and orange.

Yuzu marmalade is a mixture of the sliced fruit (peel and all) and a sweetner (honey and/or sugar). As far as I know, it is not intended for spreading on toast (serious citrus fans, however, might give it a try.); the marmalade’s primary use seems to be for tea. Indeed, the jar I bought at a Korean market in Oakland says “Citron Honey Tea” on the label, and is called “Yuja cha” in Korean (lit.: citron tea).

To make a cup of yuzu tea, spoon a few teaspoons of the marmalade into a mug or heat-resistant glass, then pour hot water over the fruit. Stir to distribute the flavor and sweetness through the water. On the cold nights and mornings of winter, I’ll be drinking this tea a lot. It is especially nice when I have a sore throat or a cold.

Yuzu marmalade can be a ingredient in cocktails. An easy one is the “yu-gin cocktail”: put a few ice cubes in a cocktail shaker, add a few ounces of good gin (my favorite is Plymouth) and a tablespoon of yuzu marmalade, put on the cover, and shake for 10 or 20 seconds. Strain into a chilled cocktail glass. Vodka would be an easy alternative. For a traditional Korean approach, you could use soju—the clear and mostly flavorless alcohol of the Korean countryside—as the alcohol base. The alcohol content is about one-half that of vodka or gin.

The tea aisle of a Korean, Japanese or Chinese market sometimes has other interesting “teas”, like jujube (a.k.a., Chinese date) or fresh ginger in jars, or dried persimmon leaves in bags. I imagine that they are purported to each have their own health benefits, but I don’t know what they are.

Jars of yuzu marmalade can be found in Asian grocery stores, especially those with Japanese and Korean specialities. The 1 liter jar containing 1 kg of marmalade pictured above was about $8.