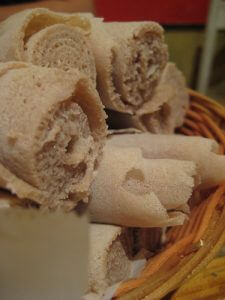 “Teff is the smallest grain in the world,” said the sign on the wall in the Ethiopian/Eritrean restaurant. I had no reason to doubt it — I had never seen teff in any form other than a pancake the size of a manhole cover or in a tightly rolled cylinder.

Teff (Eragrostis tef, also spelled tef and t’ef) is the staple grain of Ethiopia and Eritrea, where it has been cultivated since prehistoric times.  It makes its most common U.S. appearance as the flour for the spongy, slightly sour flatbread called injera, which is used in Ethiopian and Eritrean restaurants as an eating implement.

I got my first introduction to whole teff from a recipe in Heidi Swanson’s Super Natural Cooking for polenta-style teff squares. The local Whole Foods had it in stock, and when I opened the bag I was amazed at how small the grains were.  So  I got out the camera, tripod, some white paper and a collection of grains from my pantry to document it.

The first photo shows teff next to rye kernels, long grain rice, and amaranth.  Tens of teff grains could fit into a grain of rice! (But probably not enough to write your name on a grain of rice, mosaic-style.)

The next photo shows teff with short-grain rice, amaranth, and millet.

Returning to my experience with whole teff, I followed Swanson’s simple and healthful recipe, by bringing three parts water to a boil, then stirring in 1 part whole teff and some salt.  I cooked it for a little while, stirring occassionally, then poured the cooked grain into a oiled baking dish. After it solidified into a mass, I cut it into shapes (much like polenta — hence the recipe’s name).  I topped the squares (reheated in a lightly oiled skillet) with Ethiopean-influenced lentils (using a tried-and-true recipe from Sundays at Moosewood).  Tasty and nutrious.