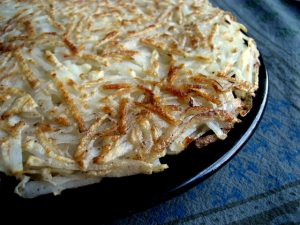 While planning a somewhat elaborate breakfast on a recent visit to my parents’ house, I remembered a once-favorite potato dish, the “straw potato cake.” The cake, which has few ingredients but requires care in preparation, gets its name from the similarity between the potato pieces and straw, and offers crispiness and softness in a golden disc.

Although it is somewhat like a big hash brown, Paul Bertolli takes great pains in Chez Panisse Cooking to explain how to make it. There’s the issue of the potatoes: Bertolli recommends using large Russet potatoes because of their high starch content. Then there is issue of cutting: he says they should be cut using a mandoline into 1/8″ julienne, or by hand. A grater is no good, he argues, because then cake will be too compact (my results with a grater, however, have been pretty good, so you might give the grater a try if you don’t have a mandoline). And it is important to rinse the cut potatoes thoroughly to remove surface starch – which would cause the cake to be gummy – and then dry them completely in a salad spinner or with towels. Finally, Bertolli recommends using a 10 inch or smaller pan because larger pans are hard to heat evenly on stoves at home. It’s also important to cook this in a non-stick pan, like a well-seasoned cast iron skillet, a seasoned carbon-steel skillet or non-stick coated pan, so the potato cake can keep its form.

Serve on its own as a side dish or topped with grated cheese, sauteed mushrooms, or anything else that goes with potato. 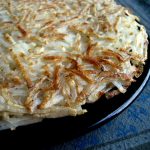 The straw potato cake has few ingredients, but requires care in preparation, offers crispiness and softness in a golden disc.
Course Side Dish

Variations: Add some chopped herbs (rosemary, thyme, etc.), cooked bacon, or spices (Indian spices might be interesting, served with a yogurt sauce) to the raw potato.

Bertolli’s recipe calls for clarified butter because of its higher smoke point and excellent flavor. I’ve had good luck with regular butter and cooking oil.