Over the last several years, the urban farming movement in Detroit has received coverage from a variety of publications, from large newspapers to niche publications.

Earlier in the week, the Los Angeles Times looked at Hantz Farms, which aims to use farming to bring Detroit back from the dead: “Farming is how Detroit started and farming is how Detroit can be saved,” said Michael Score, president of Hantz Farms. While there are scores of abandoned lots in Detroit, the company has so far not been obtain large contiguous tracts of land, so they are starting with a “pod” approach, where smaller sections of land will grow crops appropriate for the area. The crop decision is informed by the type and condition of soil – soil with accumulated toxins might be appropriate for apples but not lettuce – and what buildings are on the land – instead of tearing down abandoned houses, they can be used as mushroom-growing buildings, suggests Score.

The city is approaching large-scale farming with care, as many issues need to be addressed, like city zoning laws, taxation of agricultural lands, and various infrastructure items. Detroit’s mayor, Dave Bing (a member of the Basketball Hall of Fame) said in a statement that “Urban farming will be part of Detroit’s long-term redevelopment plan.”

Assignment Detroit (at CNN Money) has profile of John Hantz, the successful money manager (net worth of more than $100 million) who is bankrolling the Hantz Farm project. The community gardeners and other non-profit agricultural activists are wary of the Hantz project, with concerns about “corporate takeovers” and the like. Based on the situation in Detroit – thousands of acres of vacant land, little hope of an industrial revival – these fears are probably misplaced, as it’s unlikely that the city will run out of land in the near future. However, it is conceivable that if Hantz Farms is successful, they could use their accumulated political muscle to rewrite city regulations such that small producers are cut out. 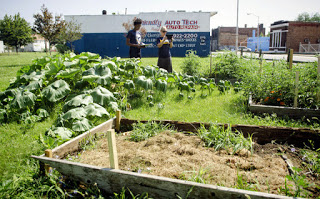 “Food Among the Ruins”
In “Food Among the Ruins” in Guernica Magazine, Mark Dowie makes a bold proposal: Detroit should face the facts and give up on its fantasy of becoming an industrial powerhouse again. It’s the best article I’ve seen about Detroit – the most comprehensive, the one with the deepest and widest view. Dowie writes about the visionaries of Detroit:

There are more visionaries in Detroit than in most Rust-Belt cities, and thus more visions of a community rising from the ashes of a moribund industry to become, if not an urban paradise, something close to it. The most intriguing visionaries in Detroit, at least the ones who drew me to the city, were those who imagine growing food among the ruins—chard and tomatoes on vacant lots (there are over 103,000 in the city, sixty thousand owned by the city), orchards on former school grounds, mushrooms in open basements, fish in abandoned factories, hydroponics in bankrupt department stores, livestock grazing on former golf courses, high-rise farms in old hotels, vermiculture, permaculture, hydroponics, aquaponics, waving wheat where cars were once test-driven, and winter greens sprouting inside the frames of single-story bungalows stripped of their skin and re-sided with Plexiglas—a homemade greenhouse. Those are just a few of the agricultural technologies envisioned for the urban prairie Detroit has become.

Some of this is already being done in other places – Will Allen’s Growing Power in Milwaukee, for example, has plants, fish, and animals growing on its grounds – and so Detroit will be able to build on other’s experiences. With the vast amount of land available, Detroit could become an experimental hub, a place where urban agricultural thinkers can get land and resources to try new ideas that are too risky for their own small spaces and budgets, an analogue of sorts to the NIH and university research in the health care system.

At the end of his article, Dowie looks at Detroit’s past and potential future:

Contemporary Detroit gave new meaning to the word “wasteland.” It still stands as a monument to a form of land abuse that became endemic to industrial America—once-productive farmland, teaming with wildlife, was paved and poisoned for corporate imperatives. Now the city offers itself as an opportunity to restore some of its agrarian tradition, not fifty miles from downtown in the countryside where most of us believe that tradition was originally established, but a short bicycle ride away. American cities once grew much of their food within walking distance of most of their residents. In fact, in the eighteenth and early nineteenth centuries, most early American cities, Detroit included, looked more like the English countryside, with a cluster of small villages interspersed with green open space. Eventually, farmers of the open space sold their land to developers and either retired or moved their farms out of cities, which were cut into grids and plastered with factories, shopping malls, and identical row houses.
Detroit now offers America a perfect place to redefine urban economics, moving away from the totally paved, heavy-industrial factory-town model to a resilient, holistic, economically diverse, self-sufficient, intensely green, rural/urban community—and in doing so become the first modern American city where agriculture, while perhaps not the largest, is the most vital industry.