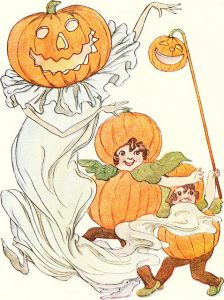 Although peak pumpkin has passed, the December weather keeps me thinking about it. For example, I would be happy to have pumpkin pie on the Christmas dessert table.  So I thought it would be fun to run three pumpkin terms through the Ngrams Viewer from Google Books:  pumpkin pie, pumpkin pie spice, and pumpkin spice.  For those not familiar with the tool, The Ngrams Viewer searches the Google Books library of digitized printed materials, which is mostly books but also includes periodicals.

Much of the explosion in pumpkin spice is outside of the Google Books reach:  it is in advertisements, non-printed matter references, marketing materials, and so forth.  If there was an Ngrams equivalent for Twitter, Instagram, and Facebook, we’d probably see a major spike in recent years.

If we remove the pie from the search, we can focus on the spice.  Pumpkin pie spice had a blip in the early 1940s, but didn’t take off until the 1960s. It peaked around 2000 then and took a major tumble. What could have caused the 1990s spike?

For a taste of the old times, here’s a pumpkin pie recipe from The Improved Housewife: Or Book of Receipts, with Engravings for Marketing and Carving by Mrs. A. L. Webster, (Phillips, Sampson, and Company, Boston and New York), 1855:

245. Pumpkin Pie
Halve, seed, rinse, slice into small strips, and stew the pumpkin over a gentle fire, in just water enough to prevent burning to the bottom of the pot. After stewed soft, pour off the water, and steam the pumpkin about eighteen minutes, over a slow fire, seeing that it does not burn. Take it off and strain it, when cool, through a sieve. Put to a quart of the pumpkin, twelve eggs and two quarts of milk, if you wish the pies very rich. Put to a quart of the pumpkin, three eggs and one quart of milk if you wish them plain. If very plain put to a quart, one egg, with a spoonful of flour, and very little milk. The more thinned the pumpkin, the greater the number of eggs required. Sweeten the pumpkin to the taste, with sugar beaten with the egg, and very little molasses. Lemon peel, nutmeg, and ginger, are good seasoning for the pies. As they require a hot oven, have the pumpkin scalding hot at the time of putting it into the plates, to prevent the rim of the pies getting burnt before the inside is sufficiently baked. Bake as soon as the plates are filled, to prevent the crust becoming clammy. The fewer the eggs in the pies, the longer the time required to bake them. Pumpkin may be kept several months in cold weather, by making it, after stewed, very sweet and strong of ginger, and then scalding it well. Keep it in a cool place, in a stone jar. Take out what you want at any time, and put to it the milk and eggs.

It’s quite a different style than the vast majority of today’s recipes: completely narrative, variations in the middle of the text.

Image Credit
Pumpkin picture from page 95 of “Mother Earth’s children; the frolics of the fruits and vegetables” (1914), from the Internet Archive Book Images collection on Flickr Commons. No known copyright restrictions.