“Open-doorness is our certification” – a tour of Marin Sun Farms, part 1 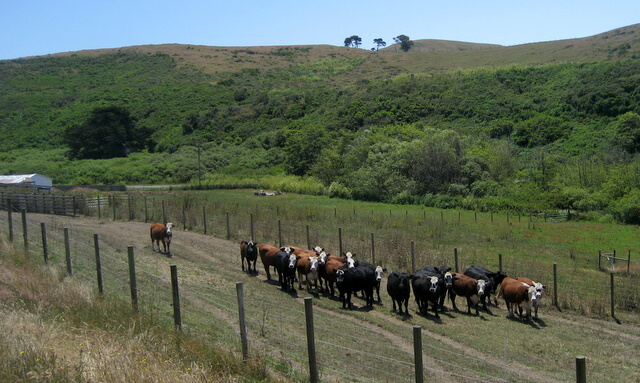 (Updated, 11/27/16: fixed broken links)
This is the first part of a two-part series.  The second part is Chickens on the Pasture.

In early July I took a tour of the ‘headquarters’ of Marin Sun Farms, a company that is best known for grass-fed beef, superb eggs, and pastured chicken and is a regular fixture at the renowned Ferry Plaza Farmers Market in San Francisco.  The word headquarters is important here, because over the years Marin Sun Farms has adapted its business model so that the company sources meat from a handful of farms in Northern California that pledge to follow its stringent animal husbandry rules (summarized on MSF’s Protocols page).

The Fifth Generation of Farming and Ranching

Our tour guide was David Evans, the owner of Marin Sun Farms, who represents the fifth generation of farming and ranching in his family.  His maternal great-grandparents came to the United States from Switzerland in 1889 and found their way to California. Sometime in the early 20th century, one of his relatives bought some land at the edge of Marin County and began ranching.  In 1962, the land became part of the Point Reyes National Seashore (truly one of the most magnificent places in Northern California, a place that manages to astound in a new way each and every time I visit it), but the pre-existing farms were allowed to lease back their land from the Federal government and continue agricultural operations (the National Park Service website has a detailed history of agriculture in the park).

The tour is part of Marin Sun Farms’ open door policy, something that Evans sees as superior to organic certification for his business – “open doorness is our certification,” he said.  Certification would give the company a recognizable label, but for a small, locally-based company like Marin Sun Farms, the certification process ends up being a lot of paperwork and expense. In addition, it can shut down the conversation between farmer and eater – in a post by Bonnie Azab Powell at the Ethicurean, Evans was quoted as saying “When people see a stamp that says ‘Certified Organic,’ they stop asking questions. It does have its function, because not everyone lives close enough to ask questions, but if you can, you should.”

During our tour of the Rogers Ranch, no cattle roamed the grasslands even though the late rains had led to unseasonably lush pastures of native bunchgrasses and European grasses that stowed away with the Spanish centuries ago, many with full seedheads.  However, the cattle-free pasture was just a temporary situation, as Marin Sun Farms had just received a new herd (Hereford and Angus breeds) and the animals were “in training.”

In order to be compatible with Marin Sun Farm’s model of frequent movement of animals to fresh pasture, the cattle need to learn to come when called (as a herd, not individually), learn about electric fences, and slightly reduce their fear of humans.  The last part is a tricky business, because a too tame animal is hard to move – it is content to stand there with you instead of heading to the next area or into a trailer.  During our visit, the animals were definitely not used to humans, and would have mini-stampedes across their training area when our group of 15 came close.  Training was expected to last about 3 weeks.  Evans was disappointed by that reality, as they were currently “overwhelmed by grass” and every day that the cattle were training was one less day of gaining weight from the seeds and vegetation in the rolling hills of the ranch.

Once the herd is fully trained, the ranch hands set up enclosures using single-wire electric fence.  Every day or two they move the fence to provide the cattle with new grass to eat, allowing the previous area to recover (and absorb the nutrients from the manure).  In all, they will spend about 3 months on pasture, increasing their weight from 800 to 1,200 pounds.  At slaughter time, the animals are about 24 months old.  In contrast, a feedlot animal is only 15-16 months old at slaughter, having eaten grass in its early days at a “cow-calf operation” and then spending its later days on a feedlot eating corn, low doses of antibiotics, and all sorts of processed feed devised by meat production experts (who are generally most concerned with economic efficiency, not animal welfare or sustainability).

If you are interested in small-scale livestock operations and can get to the western edge of Point Reyes by 10 AM on a Wednesday (60-90 minutes from San Francisco or Berkeley with the possibility of traffic jams in southern Marin County), the tour is definitely worthwhile. The setting is magnificent – if you get there early or stay around afterwards, there are trails and beaches nearby (including one that goes through a field of lupine bushes with pale yellow flowers) and the lighthouse is just a few miles farther down the road.  Dates and sign-ups are at Marin Sun Farms.

Getting back to the subtle and in-your-face magnificence of Point Reyes, here are two photos taken within a few miles of the Rogers Ranch, the first near the Bull Point trail head while the marine layer was thick and cool, and the second from near the North Beach after the fog lifted (one of those classic Bay Area beaches where half of the visitors are wearing fleece and almost no one is in the water because of its frigid temperature and highly dangerous currents (and also Great White Sharks).