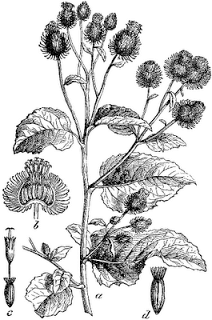 One of my minor frustrations with Elizabeth Andoh’s “Kansha” (my review is here) is that quite a few recipes feature burdock (a.k.a. great burdock, gobo, Arctium lappa), but all of the supply in local markets seems to be grown in Taiwan, even in Berkeley Bowl and Tokyo Fish Market, two markets that have many types of produce used in Japanese cooking.

So I’m trying to grow my own.

Seeds were not easy to find. Fortunately Kitazawa Seed Company, an Oakland-based company that specializes in vegetable varieties that are popular in Asia (e.g., many types of eggplants, special varieties of radish, various greens) carries several types of burdock and my favorite nursery (Berkeley Horticultural Garden) was happy to place a special order. Kitazawa is an old company (by California standards), founded in San Jose in 1917. During WWII, the company closed down while the Japanese-American Kitazawa family was imprisoned in a relocation camps. After the war, they restarted the business and today sell approximately 250 seed varieties, which can be ordered on-line and found in some retail shops. In Berkeley I have seen their seeds at Berkeley Bowl and Berkeley Horticultural Nursery. 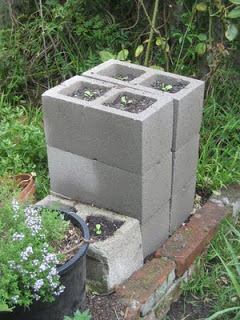 The tricky thing about burdock is that it is long — often several feet in length — and so you need to be careful about where you plant it. The planting beds in my backyard are absurdly shallow and the soil underneath is dense, so I bought some cinder blocks and built mini-towers. Into the towers I placed a mixture of sand and potting soil (probably 25% sand by volume). (Note: I got the cinder block idea from a representative of Kitazawa Seeds at a dinner celebrating Andoh’s “Kansha” book at Hodo Soy Beanery’s factory.)

So far, the plants seem to be doing well, putting out new leaves and looking healthy.

Burdock is a “A Backup Voice”

Burdock isn’t one of those superstar vegetables that tastes so much better when grown at home.  Instead, it’s subtle. Elizabeth Schneider’s “Vegetables from Amaranth to Zucchini” has this background and a great description of its role:

Although the plant is naturalized throughout Europe and North America, it is probably Asian in origin, and it stakes its culinary claim in Japan.” Used in European medical mixtures in Middle Ages or earlier. Seed company at the end of the 19th century, Vilmorin-Andrieux “The roots, which grow from 1 ft. to 16 inches long, are boiled and served up in various ways….If eaten when young, as it is by the Japanese, although it cannot be termed delicious, it is certainly not a bad vegetable.”
…
Despite minimal international enthusiasm, I’d still say that the curious cylindrical yardstick has undeniable charm, if considered as a backup voice — not a lead singer.

Image of Lappa vulgaris from Wikimedia Commons, from a book from 1892.