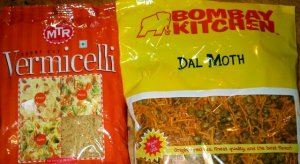 During a conversation with a friend a little while ago, the subjects of “noodles” and “Indian food” came up. Although we are both somewhat familiar with Indian cuisine, neither of us could think of any “classic” Indian noodle dishes on par with those of Burma, Vietnam, Japan, Korea, China and Thailand. For these countries, a dish that features noodles is sometimes one of the first one can think of (e.g., Pad Thai, Pho, Zaru Soba, Chap Chae). That my first impression that the noodle is not similarly important in Indian cuisine surprised me because of India’s proximity to nations with legendary noodle dishes and its position on the major trading routes.

To help quell my curiosity, I hit the books. The Oxford Companion to Food has this in the Noodles of Asia entry:

One salient point is the relative lack of noodles in the Indian subcontinent. It is hard to explain this on a simple basis such as lack of suitable cereal crops in the subcontinent, since noodles can be made from so many different and basic ingredients. The phenomenon seems to be more of a historical one. It may be that the kitchen territory which might have been occupied by noodles of certain kinds was already devoted to dishes in the dal category. There is, however, one kind of Indian noodle which has achieved a moderate degree of prominence (sev and seviyan…). [author’s note: sev and seviyan are actually two kinds of noodles, as we will see below]

This explanation seemed to make some sense, but after further reading, I learned that my lack of noodle knowledge was because of the vastness of the cuisine of India and how little is presented in the United States. My research showed that noodles appear in many forms in the Indian kitchen, primarily in snacks, breakfast, dessert, and as an supporting ingredient. At least four types of flour are used to make noodles: wheat, rice, chickpea (channa dal), and cornstarch.

Wheat Noodles
Madhur Jaffrey’s Flavors of India describes the regional cuisines of India, and has this in her section on Gujarat (info and map):

If they [pilgrims] are passing the village of Vartal, where little babes swing from cloth hammocks, they may pick up some flat, whole wheat noodles drying in coils on outdoor cots. Anthropologists today believe that noodles probably originated not in China or Italy but wherever there was wheat. This, they feel, points mainly to the Tigris-Euphrates Valley in the Middle East and to the Indus Valley now mostly in Pakistan but extending into Northern Gujarat as well.

As towns dating back to the 2nd millenium BC have been discovered here (with evidence of both wheat & sugar cane), it is likely that the wheat noodles in Vartal are completely indigenous, going back perhaps 4000 years. [author’s note: article about 4,000 year old noodles found in China]

The village preparation is very simple. Wheat dough is rolled out very thin and cut into 3 mm (1/8″) thick strips. These are wrapped into small coils and dried in the sun. At the harvest festival of Holi, the coils are thrown into boiling water, drained and then eaten with melted ghee and sugar. The use of noodles is widespread in Gujarat.

The Indian Spice Kitchen, by Monisha Bharadwaj, has a recipe for a famous use of wheat noodles sometimes called kheer seviyan. This is a pudding-like dessert containing fried vermicelli, milk, sugar, nuts, dried fruit and spices which is often served as part of post-dusk meals during Ramadan.

The left-hand product in the photo at the top is an Indian vermicelli, with three suggested uses on the package: uppma, pilaf and milk pudding (kheer). To confuse things somewhat, these wheat vermicelli are called seviyan, while noodles made from chickpea flour are called sev (more on sev below).

Rice Noodles
Also in The Indian Spice Kitchen, there is a recipe for a breakfast or snack food called noodle upma (a.k.a. appa idi, idiappam) which consists of thin rice noodles in a spiced oil (for example, mustard seeds, chilies, urad dal, and curry leaves. A special press is used to make these noodles, in which the dough is pushed through a perforated plate onto a metal tray with large depressions. Each depression contains spiced oil to flavor the noodles. The tray is put into a steamer, and the noodles are topped with more spiced oil.

Chickpea Noodles (Sev)
Sev are crisp fried sticks of extruded chickpea-flour dough (the word sev might be derived from a word for ‘thread’ which came from the root siv, referring to sewing). To make sev, chickpea flour is combined with salt, spices and water to form a dough. The dough is then pressed directly into hot oil to cook the noodles.

Lord Krishna’s Cuisine has this description of sev:

Sev rivals peanuts as India’s most popular munching snack. Anywhere people gather, a sev vendor is sure to appear with an assortment of freshly made fried noodles. Some noodles are spicy and spaghetti-thick, while others are very fine and unseasoned.

In The Glorious Noodle, Linda Merinoff writes “…[sev] is used to make the Indian version of the American trail mix, deep-fried sev refried in clarified butter with dried fruit, boiled potatoes, diced onion, puffed rice, or other ingredients and more hot spices.” The product on the right side of the photo is one example of a snack mix with noodles. In this case, the noodles are made of chickpea flour and accompanied by moth dal (the legume Vigna aconitifolia, a.k.a. mat, matki, mankashtha, and vanamudga) and plenty of spices. The mix is high in fat and hard to eat (such small pieces), but quite tasty.

Cornstarch Noodles
Classic Indian Vegetarian and Grain Cooking, by Julie Sahni has a cornstarch noodle called phalooda. She writes that it is a traditional accompaniment to Indian ice cream (kulfi), or can be eaten on their own with a milk sauce and/or fruit. Wheat or cornstarch combined with water and cooked into a paste. Then the paste is forced through a noodle press directly into cold water. The paste solidifies as they hit the water to make a more or less translucent noodle.