The Modern Burrito, a “Fusion Food”

Updated below, 11/3/18: Link to an early article about burritos in the San Francisco Chronicle. 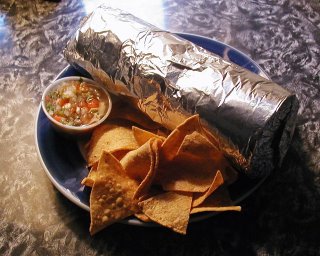 The burrito was originally a simple and rustic food—a flour tortilla, rehydrated dried beef, and probably some hot sauce—that was eaten by miners, cowboys, and others who needed portable and nonperishable food for long journeys into the wilderness of Northern Mexico. Although the burrito has never disappeared, it led a quiet existence in the U.S. until it was reinvented about 30 years ago in San Francisco. Today, in many U.S. urban areas, the new burrito is an essential source of nutrition and pleasure for artists, bloggers, computer programmers, hipsters, and people in many other occupations.
The reinvention probably took place in San Francisco’s Mission District, and converted the burrito from a small meaty snack into a portable meal comprising flavored rice, beans, salsa, cheese, meat (or grilled vegetables), and various other items (guacamole, sour cream) wrapped in a freshly-steamed flour tortilla and packaged in foil. At most taquerias, there is a long steam table, and the burrito is made for you as you walk down the line, sometimes with four or five different people asking you a question (“whole or refried?”, “hot or mild salsa?”, “sour cream?”) and adding an ingredient or two before it is rolled into a tight package and covered with foil. The fame and distinctiveness of this style of burrito is such that Wikipedia has an entry and Calvin Trillin wrote about using it as “bait” to convince his daughter to move from S.F. to N.Y. In addition, at least one podcast has been devoted to it, there is a blog (Burrito Eater) about S.F. burrito restaurants, a national review site (Burritophile), an annual award for best burrito, and even a UNIX command.

Fusion cooking has been hot in top restaurants for a decade or two. Mexico has been at the forefront of fusion for centuries. On the east-west trade routes between Europe and Asia, Mexico received frequent infusions of new ingredients and cooking techniques, like rice from Asia and milk from Europe. Rick Bayless’s latest season of Mexico: One Plate at a Time (on PBS) has a episode called Fusion Revolution which includes visits to some upscale restaurants in Mexico City that are blending ancient Mexican ingredients with flavors from the Pacific Rim. He ends the show at a humble street stand describing how the modern burrito is another type of fusion food. Even in its original state—a flour tortilla and rehydrated air-dried beef—the burrito was a fusion of Old and New World ingredients, with beef and wheat from Europe being prepared using Mexican techniques. Today’s burrito is a far more complex example of fusion, and will be the subject of the next post.

Photograph from Sparkletack, subject to a Creative Commons license

The burrito boom in the city seems to coincide with the growing number of taquerias, the fast food Mexican restaurants sometimes called “Mexican McDonalds.”

Mexican McDonalds?  I don’t think so…