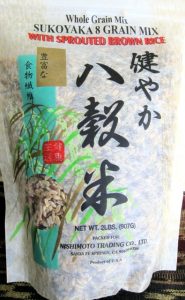 One of the many useful things I learned from Elizabeth Andoh’s outstanding “Washoku: Recipes from the Japanese Home Kitchen“, was the concept of enhancing a batch of white rice — nutrion-wise and taste-wise — by adding a variety of grains and seeds to the uncooked rice and water. You can easily customize your own blend by hunting and pecking in the bulk food section. Or, in some markets, you can buy a pre-made mix in large or small packets.  Andoh favors one from Japanese markets that contains buckwheat groats, white poppy seeds, black rice, a type of millet (awa) and flat barley (hato mugi).  In the early months of Washoku experimentation, I made my own blend with whatever was around the pantry. More recently, I have spotted packages at markets in San Francisco’s Japan Center, but haven’t purchased them, as the cost is somewhat high and they are imported from Japan.

I ran across a better alternative to either option while browsing in the Koreana Plaza in Oakland: the “Sukoyaka 8 Grain Mix”,  a blend of domestically-grown grains that includes sprouted brown rice, hulless barley, rye berries, whole oats, red rice, purple/black barley, wild rice and bamboo rice.

Following their recommendation of 1/2 cup of grain mix with 2 cups of well-washed short-grain white rice creates a hearty, interesting bowl of grain that makes an excellent accompaniment to Japanese dishes (a short video showing an efficient way to wash rice is at the Japanese Food Report).

Or, the hearty rice can be the base for a mixed-up rice bowl like bibimbap, the classic Korean mixture of rice, vegetables, a spicy sauce called gochujang, and various other items (like meats, pickles, or a fresh-cracked raw egg that cooks in the hot rice).  With the rice mix, a tub of kim chi, a fresh bag of soybean sprouts (one of the fundamental flavors in a good bibimbap, in my opinion), and a bunch of vegetables, I got to work.  First, start soaking the whole-grain mix and wash the short-grain rice (presoaking the whole grains will ensure they are cooked without overcooking the white rice).  Then start sauteing the vegetables in batches in toasted sesame oil (another key Korean flavor for me).  Cook the rice.  Finally, fill a bowl with hot rice, make piles of the just-cooked item, garnish with toasted nori and mix well. 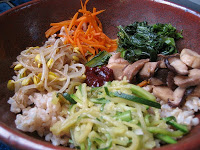 Students of bibimbap will notice a significant omission in those last few sentences:  the hot sauce called gochujang.  Although I love the savory sauce, I’m not very tolerant of chilies these days, so I had to omit it. Since the sauce is much more than just a chili infusion — it’s a fermented paste made from soybean powder, glutinous rice powder, ground chilies and other ingredients, with the fermentation process bringing out plenty of umami — I wonder if it would be possible to make a mild version at home (if not, Japanese barley miso might be a decent substitute).  Do any readers know of a recipe that might be amenable to a dialed down heat level?

(For a more formal bibimbap recipe, visit the Korea Tourism Organization or consult just about any book about Korean cooking.)