Insects are a delectable topic for editors and bloggers 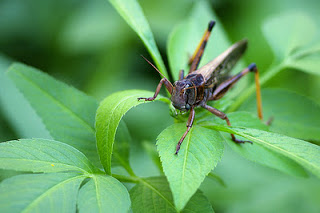 Entomophagy — the practice of eating insects* — seems to be quite a delectable topic for bloggers and editors of magazines and newspapers, with numerous mainstream publications featuring articles on the subject in recent months. Typically the articles follow a pattern that includes profiling someone that raises or cooks insects for human consumption, talking about their potential as a protein source in a resource-limited world, and then some anxiety-filled prose about the author’s first encounter with insects on their dinner plate.

Before I get to a collection of links, an article by Sarah Schmidt in Heifer International’s World Ark that deserves a special shout out because it has a different focus. Although she has most of the elements of a standard entomophagy piece, Schmidt looks at some positive developments around insects as food in the developing world.  She notes that although many cultures around the world traditionally eat insects (I would guess that more cultures eat insects than don’t), the people who run food programs — bureaucrats in the United Nations from Europe and other industrialized countries — generally don’t eat insects, and thus are potentially ignoring a source of affordable and culturally acceptable food. To change this, the UN Food and Agriculture Organization (FAO) has started including programs on insect raising in their portfolio**:

The FAO first became interested in edible insects about eight years ago when its researchers were studying the Central African bush meat crisis—steep declines in animals traditionally used for meat as a result of deforestation and unsustainable hunting practices. “One revelation was that up to 30 percent of the people’s protein intake during the rainy season comes from insects,” explained Paul Vantomme, a researcher for the UNFAO’s Forestry Department. “Yet insects were, and still are, completely ignored in all of the international discussions of the bush-meat crisis.” Vantomme began to look into the issue in depth and in 2004 published a study on the role of mopane worms as a food source in the Congo Basin.

The worms, the caterpillar of the Emperor moth, thrive in the forest during the region’s three-month rainy season; women and children gather them by hand from trees or the ground. Gram for gram, they’re higher in both protein and fat than meat or fish and are also rich in calcium, niacin and riboflavin. They can be stewed, fried or ground into nutrient-rich flour. In Central Africa, local people often make the flour into pulp to be given to children to combat malnutrition or to pregnant or breastfeeding women. They’re also an important source of extra income for rural families. One study from Botswana found that the mopane worm generates about 13 percent of household income for rural families but accounts for only about 6 percent of the labor output. Rural people often sell them to traveling merchants, who then sell them at urban markets.

A potential issue with this program is that the above-mentioned worms are gathered from the forest – i.e., taking advantage of nature’s bounty – making them vulnerable to overharvesting just like fish or animals***.  With this in mind, a significant challenge for a program like the FAO’s is to make the transition from gathering to farming.  Initiatives in places like Laos – where the FAO is giving out “starter kits” for cricket farms that consist of insects or eggs, a supply of appropriate feed, and a 3-foot-wide concrete cylinder that serves as the ‘farm.’  If the programs in the Congo Basin and Laos are successful, how long will it be before Heifer’s gift catalog includes a kit for mopane worms, crickets, or another culturally appropriate and feasible insect crop?

Here are some of the articles I ran across recently along with short summaries:

Notes
* When applied to food for humans, the term “insect” generally breaks the biological boundaries placed on the term (i.e., six legs, a member of the Insecta class, etc.) and includes arachnids like spiders and scorpions, and myriapods like centipedes and millipedes.
** I haven’t seen a single-word term that describes the controlled raising of insects for human consumption.  Plant raising is “agriculture”, fish farming is “aquaculture,” so should we call insect/spider/scorpion farming “arthro-culture”?  Or have sub-groups for each category like “insectculture,” “arachnid-culture” and so on?
*** Speaking of insect hunting, “My Life as a Turkey” from PBS Nature has some superb footage of the turkey family hunting grasshoppers.  The whole program is a gem, with a compelling story and excellent camera work (the shot of a snake drinking water that collected in a leaf is magical).

Random link from the archive:
Grapefruit vs. Gasoline: Elasticity Illustrated