The software on the microfilm reader made me a little scan crazy, so I grabbed a few more fun bits from the March 27, 1898 edition of the New York Herald while my USB drive was working well with the microfilm reader’s software (something that didn’t happen the first time I visited the newspaper room).

I like this advertisement for a bicycle light, which burns kerosene:

The left-hand column of text below the drawing (with original capitalization preserved and my notes in square brackets):

Simple to understand. Easy to Handle.
RIGID BRACKET Adjustable at Any Angle on the Front Post, Handle Bar post (outside[?] brake does not interfere) and Either Side Fork of Any Bicycle.
HINGED FRONT DOOR. Finest Crystal Glass
ALUMINUM PARABOLA REFLECTOR. Removable
OUTSIDE OIL FILLER. Seldom necessary to remove Oil Fount from Lamp.
NEW SLIDING LOCK. To hold Oil Font in Lamp. Simple and effectual.
GOSSAMER HOOD. To protect Lamp when on the wheel in daytime.
BURNS KEROSENE and is well known. KEEPS LIGHTED.
With the Reflector increased in size (a compomise between the “STANDARD AND TANDEM” of last year) the 1898 Model “20th CENTURY” more than sustains its universal reputation as being The GREATEST LIGHT on Wheels.

The right-hand column of text below the drawing (with original capitalization preserved and my notes in square brackets):

The “1898 20TH CENTURY” Lamps are much improved in mechanical construction and are readily distinguished in appearance from those of other years, and each lamp is also stamped [illegible] MODEL,” and further the packing boexes are of an entirely different pattern and are plainly printed “THE 1898 MODEL.”

Any advertisements appearing as only “20TH CENTURY” at lower than market prices are quite sure to refere to Lamps of other years and not “THE 1898 20TH CENTURY.”

The text below the advertisement for “The 20th Century CYCLOMETER” reads

Two more images are after the jump.


If you ever wondered how the late-19th century dog groomers in Paris worked their magic, this series of drawings might help: 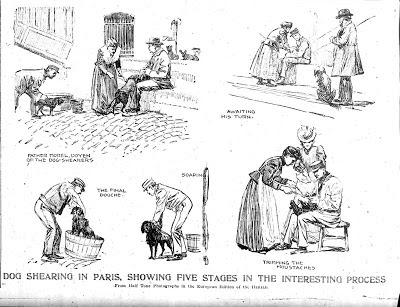 And here’s a quick guide for reading hieroglyphics: 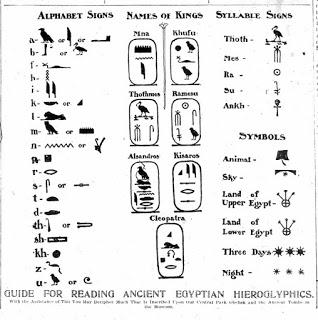 Image credits:  Images are from the New York Herald, March 27, 1898. They are in the public domain in the United States because they were published before January 1, 1923.